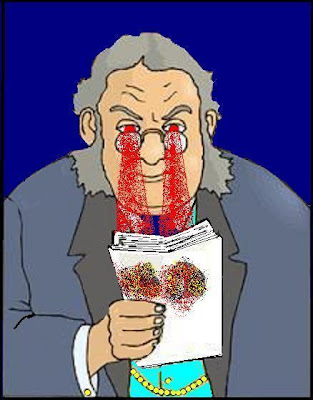 1. In the Sangre de Cristo Mountains, a young man embarks on an epic journey to obtain a wagonload of dry goods with which to begin a career as a tradesman. Also, sophisticated intangibles.

2. Circus entertainer Joe Cristo was a great juggler, until he tried it with knives. Now occupational therapist Betty Jane Rumbaugh must help him find a new profession, which won't be easy what with Joe being a quadriplegic.

3. Hip Santa Fe artist Sage Barrens gets a day job waitressing in a little cafe. One day a customer finds a tortilla that doesn't just have the figure of Jesus on it -- it also bleeds. Soon pilgrims flock to the cafe, and Sage is making a fortune in tips. But then the blood is found to be that of Sage's missing ex-husband . . . and her career really takes off.

4. As a small child in Kansas, international superspy Mae Wong studied Japanese culture at Joe's Little Princess Tea School, until she discovered the sinister old Tea Master was really a double agent working for the notorious Sangre de Cristo gang. After foiling their plot to transfer control of civilization to an old man at the Vatican, she goes on to topple Communism and has her way with Hollywood producer Thor Jones.

5. Archaeologist Montana Smith suffers disillusionment when, after a lifetime of searching, she discovers the Holy Grail. The cup itself is unremarkable, but Montana becomes a pariah when tests reveal that it was filled not with Sangre de Cristo--the actual blood of Christ--but with Sangria de Cristo . . . a mediocre Spanish wine concoction.

6. Six characters who all have terminal illnesses, defective libidos, and psychiatric problems compare their medications, contemplate the wallpaper and manifest their various pathologies in a way that is horrible, yet mesmerizing to behold.

Please accept my query for SANGRE DE CRISTO, a character-based historical novel set in New Mexico at the time of Mexico’s independence from Spain in 1821. It is the story of three men from different cultures caught in the clash between Spain’s declining empire and America’s emerging one.

Kincaid is an entrepreneurial lad from Missouri, Manuel is a disenfranchised peasant from Taos, and Joe is a philosophical, black American slave. They struggle through the turmoil caused by the Mexican revolution and the arrival of the first Americans. Young Joshua Kincaid suffers numerous physical and emotional challenges as he grows to manhood and navigates through the alien ways of church, state, combat, treacherous love, slave raids, bitter rivalries, and struggle to become a trader on the Santa Fe Trail. He is mentored by Joe [He's mentored by a slave? Whose slave is Joe? How does Kincaid have contact with Joe?] who is the moral compass of the book, and befriended by Manuel who is in danger of slipping into peonage. Kincaid is seduced by Maria, Manuel’s daughter, so Kincaid will help her father capture and sell slaves to avoid selling himself into servitude. [Maria. I just met a girl named Maria. And suddenly, I'm deeply involved in the slave trade.] Kincaid’s acts on the slave raid trouble him greatly and estrange him from Joe, Maria, and Manuel. ["I didn't mind helping you capture and sell people into lifetimes of slavery; I just wish we'd done it with more kindness."] After traveling to St. Louis to obtain financing and to buy trade goods,

[Banker: What can I do for you?

Kincaid: I need financing to buy goods, which I will take one thousand miles to the badlands of New Mexico and trade for stuff. Then I'll return and pay you back with my profits.

Banker: No, seriously, what can I do for you?]

Kincaid returns to Taos in triumph [Apparently he managed to get some goods to trade. I think calling him "triumphant" is overdoing it.] [Wait, the triumph is that he rode two thousand miles in the old west without getting killed.] to battle one rival and to find Maria pregnant and married to another. [How do you solve a problem like Maria?]

Underlying the story is the thesis that Spanish colonial policy failed New Mexicans economically, socially, militarily, and religiously, and trade with Americans opened new opportunities. The book is the first volume of a series about America’s conquest of New Mexico in 1846. [I hope the book is the first in a series of novels set against the backdrop of America's conquest of New Mexico. The way you're describing it, it's a history book.]

A major theme is slavery which was pervasive in what is now the American southwest. In fact, New Mexico was the last state to abolish slavery. Various forms are contrasted: traditional enslavement of blacks and Indians, peonage, and the church’s exploitation of pueblo Indians at missions. A particularly dramatic episode is a slave raid to steal Navajo children. Religious issues are also explored. Hence the title which means Blood of Christ. It is also the name of the mountains of Santa Fe and Taos. [I don't need to know any of this stuff. Focus on the main characters.]

The novel will be controversial because the story presents many subjects deliberately ignored in American history. I have researched the subjects meticulously and can support every assertion I have made. [In fact, my appendices and footnotes comprise two thirds of the book.]


Hampton Sides’ BLOOD AND THUNDER and Luis Alberto Urrea’s THE HUMMINGBIRD’S DAUGHER [Daughter] and THE DEVIL’S HIGHWAY have demonstrated that a large market exists for books dealing with the borderlands. All three have been bestsellers, and their movie rights have been optioned. [Thus it's safe to assume that my book will be a bestseller and it's movie rights will be optioned.]

I won the Southwest Writers’ Group’s national contest for historical fiction in 2000 with the genesis of this story. I became interested in the period while a professor at the University of New Mexico.

I look forward to promoting the book. I have extensive experience selling sophisticated intangibles ([Grace, charm, class, refinement,] software, securities, data, etc.), I’m an engaging public speaker, and I have many contacts in the southwest who are librarians, deans, university presidents, and a former governor of New Mexico.

A synopsis, chapter outline, sample chapters, and manuscript of 90,000 words are available for your review.

It would be more exciting if Kincaid were going to St. Louis for weapons so they could attack the slave traders. After surviving attacks by Indians and outlaws, he rides in triumphantly with rifles, and the cavalry, and they save the day. Instead, you have him riding in triumphantly with a wagonload of salt pork and gingham.

We don't mind learning a little history while reading a novel, but the history is not the story. The people are. Make us care about the characters. The book may be different, but the query sounds like you couldn't decide whether to write a novel or a textbook.
Posted by Evil Editor at 12:01 AM

Hey, if you're the guy who skimmed my credit card number, let's keep it our little secret. Whoever you sold it to, they spend less than my wife did.*

*I assert that this is an historically accurate representation of that old joke.


Author, the obvious intensity of you research makes the book seem more interesting to me than the query itself does, but EE is right. What's the story? I don't want to read a novel that's just a history lesson thinly wrapped around a plot outline, and I don't really want to read a story that's just an excuse to teach A Message about slavery or whatever either.

Some of the language here also feels a bit clunky to me.

Shades of--dare I say it?--Cassie Edwards. This one goes a bit too far in the opposite direction. Is there such a thing as over-documentation?

That query made my head hurt. It definitely sounds like you were trained to write for an academic audience and are not entirely clear on how that differs from the ways of fiction. Maybe the book is good, but you need to subdue the professor who took over this query and manifest your inner Steinbeck a little more.

Historical fiction is legend. Phase II of your work as a novelist is to sell the legend you wrote, hopefully to a million people. Will specialists in the history of New Mexico find this book accurate and true in every detail? Hopefully not because A] It's fiction. And B] who cares? They would not be a significant portion of your audience.

Pitching a story is not much like selling your scholarly tome to university libraries and specialists in your field. As EE points out, this sounds like the book may be long on historical accuracy and short on plot/story. The movie ADAPTATION deals with one writer's struggle with this exact dilemma, so if you haven't seen it, you might find it sparks insight.

When I read the letter, I felt that you are trying to sell us on the theme more than on the story.

Also, the description of the plot as written is offputting from the slave trade angle.

This sounds like it could be a good story, so when you revise, I'd suggest focusing on explaining the connections between the characters and the story a bit more and ditching the talk of the themes.

"Maybe the book is good, but you need to subdue the professor who took over this query and manifest your inner Steinbeck a little more."

Anon- whoever who are, that was a very good one.

Don't worry- it's painful to listen to this stuff, but in the end, it's worth it. Better to know now than when your query is out there in the world. And maybe a university press would be fine with your query- I don't, honestly, know.

What I do know is, there are people here who've had good success with queries preciesly because they've attended EE's 'academy from hell.'

I like the scene you submitted over the weekend, by the way, which I'm guessing is from your novel.

Thank you, Evil Editor and company. I learned a lot, including to use my spell checker and to find my inner Steinbeck. I clearly agree with you that selling the story is most important. I thought I had done that, but evidently missed the mark (a 19th century phrase concerning shooting contests). I felt I needed to assure people, particularly those east of the Hudson River, that the Spanish brought horrors to the southwest nearly a century before the Pilgrims set foot on Plymouth Rock. At any rate, this has been great fun (?), and my next draft will benefit from it.

And, yes, robin s, the scene I submitted of Kincaid’s beating leads to his banishment from the American trading party, and he must learn to survive in an alien culture.

See what you think of my new beginnings which might appear soon.

When you describe your characters at the beginning of the query, it feels like you're labeling them: "Entreprenurial lad," "disenfranchised peasant. For a character-driven novel, try to find something about each of the characters that will make us want to know them. What makes Kincaid unique and endearing to you? That's what's going to capture interest in your query. Well, that and the plot, of course. And maybe try to get some of the voice from your novel into the query, too.