My Bazillions and Yours

1. Hector Crawford, once the richest man in the world, died lonely and estranged in a one-room shack on an isolated island. Now his family is after the money. Can Sean McMillan, Crawford's lawyer and the trustee of his estate, convince them there is nothing left . . . while he searches the island for the treasure he knows Crawford hid?

2. This novel/memoir/how-to book features the story of "Lucky" Ned Crump, a Las Vegas gambling guru who becomes a cult figure after winning and losing fortunes. Complete with illustrations, charts, superstitions, fallacies, and the constant exhortation to “Go With Guts."

3. What will happen to the sanity of real estate speculator Harvey Jones when billions of giant worm-things from space rain down on Malibu and make trails of toxic acid slime on everything he owns? Plus, an amazing cheerleader and her pony.

4. When Elmer Fudd decides to become a major player in the South American slave trade, he discovers his biggest competitor is none other than Bugs Bunny. Not content to let that wabbit spoil another one of his pwomising enterpwises, Elmer dukes it out with Bugs in a series of madcap antics, until they finally settle their diffewences and agwee to go into business together. Now they just have to find a way to wound up those wascally Bazillions.

5. Candice Matisse is rightly proud of her bazillions. What started as a modest endowment when she was a teenager has grown to towering proportions. Now, charmingly obnoxious entrepreneur Max Difford has his eyes on Candice's bazillions. But can he get his hands on them?

6. Gilbert Peachtree, inventor of a time machine, goes back in time, invests in a sure thing, and returns to the present to find himself a bazillionaire. Unfortunately, his meddling caused uncontrollable inflation, so everyone is now a bazillionaire. 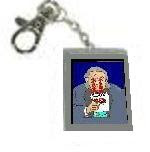 You can win in Las Vegas, enjoy a more fulfilling life, and score a free photo keychain! [I'm considering offering a free photo key chain to anyone who purchases Novel Deviations. You need a clever gimmick to make it as a small business these days.]

My Bazillions—And Yours is a novel of 110,000 words presented as a combination memoir/how-to. Subtitled What It Means To Be “Lucky,” it is the idiosyncratic story of “Lucky” Ned Crump, the self-styled gambling guru whose IncrediSystems have garnered a cult following since their first appearance in 1998. A guileless man subsumed by the Las Vegas dream, Ned wins and loses fortunes, guest-stars on The World Series of Poker, pursues his true love, spends time in jail, vanishes in the Alaskan wilderness, and finally finds something akin to transcendence. [A brief list of other things that happen besides the main story is okay, but what is the main story? The Alaska vanishing is intriguing, but the other items on the list need elaboration to interest me. What was he in jail for? Who is his true love? What does he find, and what does it transcend? If this is a novel, you want us to care about Ned. Here's a bunch of things that happen to a character I made up isn't nearly as compelling as Here's how a man captures and loses the American dream, all in pursuit of true love.]

Because Ned wants nothing more than to share his logic-defying success with you, his tale is punctuated with gambling advice, complete with illustrations, charts, superstitions, fallacies, and the constant exhortation to “Go With Guts.” [As gambling advice is readily available in a format more easily studied than a novel, I assume (or suggest) that Ned's advice is amusing, and not mathematically sound.

As I lay in bed next to Jolene, caressing her white skin, it occurred to me: I never should have gone all in hoping for an inside straight on the river. Even if no one else had one as a hole card, my chances of drawing an 8 were only 4 in 32. For once, Going with Guts let me down. See appendix 32 for my chart on when to stick around after the flop when looking for a straight or a flush. Anyway, back to . . . Where'd Jolene go?]

My own fascination with Las Vegas, its games, and its characters comes from countless visits and experiences that have grown into creative work and part ownership of CheapoVegas.com, a travel website, and BigEmpire.com, its sister humor site. Together, these sites welcome a million unique visitors each year. Bazillions is my second novel based on this body of writing and collaboration. The humor in this book stems from my award-winning comedy writing and performance. Its literary quality reflects my M.F.A. in poetry plus twenty years of writing both professionally and avocationally. [I think the whole book should be written in verse;

I think that I shall never see
A draw as lovely as a 3.
It's not so hard to understand:
I've got three more 3s in my hand.]

Since you represent innovative fiction, pop-culture topics, and new novelists, you stand out as an agent who can make this book project a success. Please allow me to introduce you to “Lucky” Ned. Sample chapters (print and audio), [Audio? Who reads it, Doyle Brunson? What you really need is a video version. I, for one, would much rather watch a manuscript acted out on TV than read it. Especially if you can get some A-list actors to play Ned and Jolene.] a synopsis, and my bio are enclosed. The full manuscript is available now at your request.

Thank you for your time—and good luck always.

This sounds like a combination fictional memoir/how-to book, but calling it a novel is a stretch. If you're selling it as a novel, focus on the plot.

If your target audience is gamblers, they may not want to wade through a 110,000-word novel to get tips from a fictional character. And if your target audience is fiction lovers, only those with a keen interest in gambling will not be annoyed by frequent pauses to provide charts and statistics. Either target may be big enough, but I suggest choosing one and tailoring the book to their preferences. You can't be all things to all people.
Posted by Evil Editor at 6:55 PM

This is a hard one. It does sound like you could have an interesting story in there or a how-to book in there, but both?

Like EE said, it's trying to appeal to both crowds but you end up appealing to neither.

And then you mention this is the second novel that you've written. This implies to me that this other novel is published, but I don't think it is as you don't give the title and you talk about being a new novelist.

We all have a bunch of things written, it does nothing to add that to our list of credits except to make you sound unprofessional.

Perhaps you really do have 2 books here. The novel and then a follow on how-to book once your novel takes off and the character becomes popular. Or, if the publisher's interested, they come out as a set.

The variety might be more appealing in the setting of your blog than it would be in the form of a printed book. Translating a story from one medium to another often involves structural changes because of the ways various media work & don't work. Or maybe it would do well on the "graphic novel" shelf. Cannot tell. Bending genres and reinventing the novel is a dangerous business. Think of the poor slush monkeys, faced with piles of mail to sort through. Whenever they read a query and wonder wtf is that?? they're most likely to pass.

I'd get rid of the last two paragraphs and tell us more about the story. Let your award winning comedy writing speak for itself.

This reminds me of those "tell all" books about restaurants. Like Anthony Bourdain's Kitchen Confidential or Daniel Boulud's The Fourth Star.

They aren't marketed as novels but as "industry insider" books that reveal secrets and gossip about the industry.

I'm working my 'something' off here, but had to say, love the background picture in the picture.

I get the concept, I just don't think it is communicated as effectively. It gets confused when you define it as the memior/how to. Just say novel. And then later you can say, the first-person narrative is structured the main character's hip-tips on gambling.

It sounds fun and I get it. But I also agree with what the other commenters say. Tighten it up. Focuse on plot and less on execution.

Interesting. Last time we had a "hoax" query that sounded pretty genuine; now we -- I guess -- have a genuine query that sounds like it could have been written as a hoax.

There's way too much of The Author in the query, and not nearly enough of the story. Fix the balance and the odds might start rolling in your favour.

This is a book by someone obsessed with Las Vegas.

The query letter is signed, "Sincerely."

That's where you lost me.

EE is in top form. At this rate he'll be tearing apart my query letter in no time. Go EE!!

curses... i was hoping for number 6