It was pizza day and there was an uproar in the Cafeteria because the only topping available was pineapple and anchovy. The trainees declared it a tragedy––pizza was the only thing they had to look forward to––while the more experienced caseworkers picked flecks of fish and soggy fruit off their slices and silently cursed the kitchen staff. Amelia Morgenthal alone was unmoved; she’d never really understood the appeal of pizza.
She sped past the Cafeteria and through the halls, hiding her face in a file. She didn’t think she could bear one more unnecessary question or inane comment, yet she’d have to, since she still had eight more practice sessions to lead today and in decades of doing this job she knew that trainees were never prepared for their first assignment.
Amelia darted into the relative safely to her cubicle. High-stepping over boxes, she angled herself around the desk, knocking a few loose files onto the floor. She bent to retrieve them and something caught her eye.
There was a present on the seat of her armchair, wrapped with smudged printer paper and tied with an incongruous purple ribbon. It was obviously from Tad. Amelia rolled her eyes. When will he learn that this crap doesn’t work on me?
She wanted to toss it straight into the wastebasket, but Tad was her boss and Amelia knew he’d come fishing for a thank you later. The package was heavier than expected. She tugged the ribbon and the paper fell away, revealing a snowglobe. Iridescent flakes settled around a grey plastic mountain; at its peak was a little man, raising his arms in victory. Painted along the bottom in a bright yellow script were the words, ‘You can do it!’
Amelia frowned. Why had Tad given her this thing?
She decided she'd just have to go ask him.Taking the quick route through the cafeteria, Amelia picked up a couple of slices of pizza. A thank you gift in return couldn't hurt, and Tad never turned down a slice, though maybe it wouldn't hurt him to miss a meal...Tad's office was clean and tidy. No books or boxes on the floor, no papers strewn around. Just today's newspaper in the center of the desk. As she surveyed the privileges of being in charge, a noise in the doorway caused her to turn around."Oh," Amelia said. It was Tad's secretary. "I was looking for...""Sorry," the woman replied. "You just missed him. He's out until next Thursday."As the secretary bustled away, Amelia took another look around and shrugged. Oh, well -- a gift is a gift. She wrapped the pizza slices in a sheet from the newspaper and left in on his chair.
Opening: Rachel D'Erminio.....Continuation: ril
Posted by Evil Editor at 12:47 PM 3 comments: 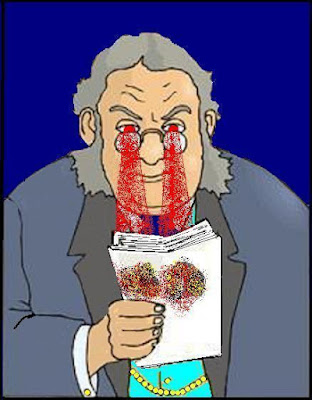 1. When adventurer Amelia dies near the summit of Mount Everest, she finds herself in her own personal hell: holding down a tedious office job on the production staff of the afterlife's most popular reality show, Romance Live Stream.

2. After foxy Wendy Fitz says she'll never date Bill "One-Up" Stetson, he tells her she'll never forget him. The fates conspire against them both with experimental magic, mad science, and multiverse time travel to prove them wrong. And right.

3. The latest rumor in Hell is that whoever climbs the highest mountain, Neverest, can escape to purgatory and finally find some rest. Is it true or simply the latest diabolical torture? Mountain climber Sid Shanks is about to find out.

4. Asked by his teacher for an example of an adjective along with its comparative and superlative forms, Joey replies, "never, neverer, neverest. She compliments his answer profusely, rather than risk he'll murder her after class. Just another day in the Newark school system.

5. It had always been Marion's dream to scale Everest, but when she gets halfway up  and sees the mess of garbage and frozen corpses cluttering the once-pristine mountain, she turns back and starts a Go-Fund-Me project to raise money for trash bags, body bags, and a community cleanup project.

6. In a parallel universe, climbing Neverest is the goal of the most daring mountaineers, not because of its height so much as because it's crawling with abominable snowmen who will stop at nothing to protect their home from interloping humans.

NEVEREST is a gender bent reimagining of Dante’s Purgatorio, complete at 100,000 words. Like Olympus, Texas it is inspired by literature and weaves together a narrative through the eyes of multiple characters; like The Good Place, it explores a dysfunctional afterlife and uses satire to question the status quo. [Or, to put it more succinctly, Neverest is a combination of an 800-year old poem no one has read, a novel(la) no one's had time to read because it just came out in May, and a TV sitcom.]

The Colloquium, a mysterious collection of souls who influence life on Earth, demands that Amelia tend to Rosealie while waiting for the other half of her fated bond, Max Lieberman. There’s just one small problem: Amelia erased a long-awaited reconciliation between the two. So when Max arrives ready to resume his relationship with Rosealie, he is promptly rejected, and Amelia must get the two wayward lovers back together.  [You know, if you spell her name Rosalie, Blogger's spell check won't keep underlining it in red.]

The more Amelia discovers about the couple and their past lives, the more she is convinced that they deserve to be free from The Colloquium’s voyeuristic gaze and each other. Rosealie becomes the one person who makes Amelia feel seen, and Amelia decides she cannot betray her new friend, [It would be a betrayal to get her back together with the man she just chose to get back together with? So the colloquium was behind their reconciliation?] even if it means giving up on freedom. [Not sure what that means. Is Amelia a prisoner? Or does she get to do things on the weekend and holidays, like watch Romance Live Stream #1 and go to harp concerts?] She confesses everything to Rosealie and the women form a plan to escape, [From where to where? Wait, do they climb through the seven levels of Colloquia?] but The Colloquium has a secret weapon––Max––and they are willing to do anything to keep their beloved show running. [The show got along fine before Rosealie died, why won't it get along without her now?] [Is Max a secret weapon because he's working with the Colloquium? Or are they just threatening him if Rosealie doesn't take him back?]

Despite all the blue words, it's not bad, in that it's organized and has some specificity. But it inspires a lot of questions about the plot, which should be avoided unless you want to answer them in the query.

Is it really a reality show if the Colloquium can demand that the plot progress exactly as they want it to? The Bachelor season doesn't end immediately if the bachelor doesn't give a rose to the woman the producers wanted him to end up with.

If you die, and find yourself in a job as a caseworker who investigates the past lives of new arrivals in the afterlife, and you believe nothing could get worse, I have no sympathy for you. That job sounds fascinating. I can think of lots of worse stuff, much of it described in detail in Dante's Purgatorio.

Speaking of which, I don't think calling your novel a reimagining of Dante’s Purgatorio in your first sentence is going to entice a lot of people to venture into your second sentence. If your book is light, like The Good Place, You don't want to compare it to something really heavy. And I'd put the first paragraph at the end of the plot summary.

Popular works (among hundreds) that mix afterlife with reality: Good Omens, American Gods, Heaven Can Wait, half the seasons of Supernatural. Your book may have a similar tone to one of these.

Because most of the plot takes place after the Everest tragedy, and in another world, the title comes across as an attempt to be clever or cute or funny. Doesn't work for me.