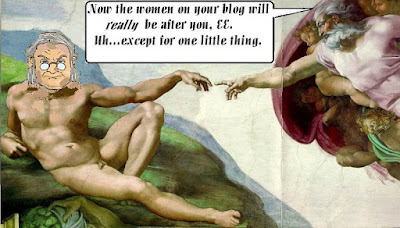 Your caption on the next cartoon! Link in sidebar.
Posted by Evil Editor at 11:59 AM

You finally threw me a caption bone.


Your wish is granted; it shall be bigger... --anon

Yay, Robin got a caption! Finally!! But, of course, as Iago says, it's indeed the Perfect Storm.

I am a bit amazed, however, that EE elected to put his visage on Adam rather than God. Veddy interesting...

Very slick caption, Robin! Although I'm not sure you'd notice once you'd tied him up!

SO that's what those glasses are for?

I think that I saw this picture once in Vienna, At the SchnitzelWerks, I think. Either that or a cocktail party with those little sausages on wry buns.

I've been reading and rereading and marking pages and cutting and pasting and resaving and and and almost all day long, except for a panic attack this morning, so I finally decided I deserved a trip on here to see what's happening.

Glad you guys got a kick out of this one.

You're right, buff, I could've worked with 'it', once I had him all tied up.

I spent so much time at that stupid Q&A that I had to "refresh" by the time I got to this historic bit of clip. I had to squint, desperately trying to figure out what Robin(as God) could possiblly have to say to EE (as Adam). It was worth the wait!!! LOL. And I really like the typestyle selection too! Great way to tickle my funny (I'm boneless) on a Monday.

How are you all?

PS - Surley this isn't indicative of the real EE. There's no way I'd ever believe that.

Hey, the guy was just born. And he's never seen a woman. And it's cold. Give him a break.

I'm kinda lovin' that body of his, all except the (apparently) really cold part(s).