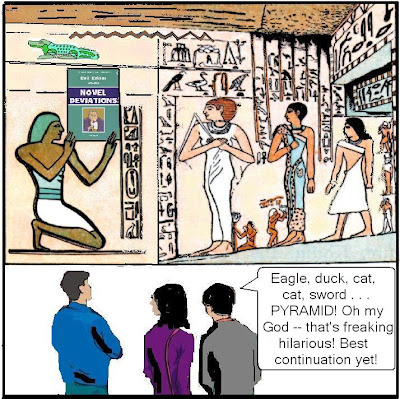 Your caption on the next cartoon! Link in sidebar.
Posted by Evil Editor at 7:39 PM


Fascinating, yes. And they say some of the JOKES are even older! --anon.

Some people say they came to Earth in giant spaceships. Now, I'm beginning to believe it. --anon.

Some classics never go out of style.--writtenwyrdd

According to the hieroglyphs, the ginger bird is saying, 'tut tut.' --WO

Y'know, I've never been a fan of guerilla marketing, but this EE AND Lacoste kind of works...--anon.

OK, fess up, who's the comic genius that came up with the chosen caption?

Yanno, I get the Anon thing when something is just so-so and you don't know how well it will be received. But when that something is genius, I just don't get it.