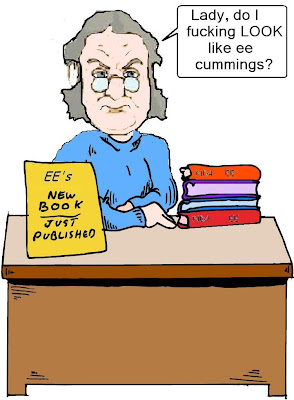 Your caption on the next cartoon! Link in sidebar.
Posted by Evil Editor at 7:33 AM


Book signing? No way! I'm here to prey on the innocent!--WO

Sure beats the hell out of speed dating...--WO

Excuse me while I play around with my balls...--WO

Do you suppose anyone has noticed that I'm wearing a WonderBra?--tal

These are all wonderful. I laughed loudest at the chosen one and the speed dating one, although WonderBra is pretty funny too.

OK. I'll bite. Why do you have a woman's itty bitty body and a man's big head?

NO - you look like the Mona Lisa in Drag!

Query: "Mona Lisa in drag"? It was always my understanding, in my not-so-flaming youth, that "drag" referred specifically to a man dressed as a woman--never to a woman dressed as a man. Am I wrong, or has the meaning changed in the last few decades?

Drag goes either way. Google the drag kings and perhaps you might find something. They're especially well known in San Francisco.