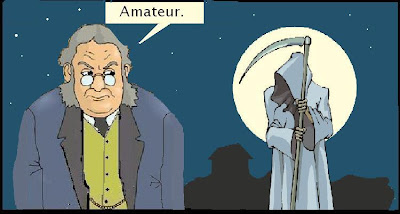 Your caption on the next cartoon! Link in sidebar.
Posted by Evil Editor at 12:56 PM

I have a question for anybody. I have a character who speechifies a bit and I want to demonstrate that he pauses in these speeches, but I don't want to write "he pauses".

What I did was to break his speech into paragraphs, at times. Anybody know the correct way (or if there is a correct way) to punctuate this? Here is an example--

“None of you will of course mind dying.” Malcolm stated slowly. “You’ve got better places to be than this spiritual shit-hole, and you’ve been waiting for me to arrive for quite a long time, I suspect--

--If you don’t mind me saying, I’d be thanking me for what I plan to do. They claim when you get there, angels will be waiting, and eternal bliss will be the reward for your cowering servitude.”

I tried the dashes to promote continuity. Anybody?

Normally a dash shows the speech was interrupted. An ellipsis in the middle of one character's speech would show a pause.

How about having your character pause by doing something, such as taking a drink, checking his/her watch, reflecting on a post in EE's blog, etc.?


Dammit, I hate it when the family come around unannounced. --anon.

Your opening's fine, the middle's so-so but I'm afraid your ending is way too melodramatic...--WO

BTW, I agree with EE in that usually a dash signifies an interruption, while an elipsis signifies hesitation or a pause.

I also like wes' suggestion. Maybe you can have him doing other things, like giving the evil eye to his weredingo or something. ;-)