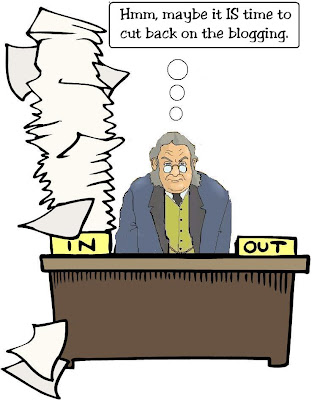 Your caption on the next cartoon! Link in sidebar.
Posted by Evil Editor at 8:26 AM

Every day it's the same - the nightmare drudgery of switching boxes...--WO

EE, you've become such a nice editor! I was reading the Facelifts from 2006 in the archives. Man, brutal (but hilarious).

You actually told one guy to trash all his characters and in their place add a brutal eunuch, two wolfmen and the Pookah of Leinster.

This caption scares me.

This isn't a message, is it?

As I struggle to feed my blogging habit with these words, a redlined question mark bursts from my manuscript and loops itself round my neck, dragging me screaming towards the open maw of my abandoned ream of script.