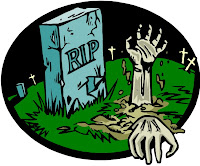 Every year zombies make appearances in fake plots. But this year, four of the following turned out to be the actual plots of minions' novels. Which four?


1. Panic sets in at Glitzy Gloria's Hair and Nails Emporium when all of Tuesday morning's ladies turn up with pasty white complexions and a taste for brains.

2. Murdered by aliens they ruled over ruthlessly, Captain Sabine and the Emperor have come back to life! It's revenge time, but can two zombies wipe out an entire alien fleet?

3. When her parents quit their jobs and move the family to Tennessee, Cami ends up with a summer job putting abnormally intelligent zombies back into their graves. Talk about your dead-end jobs.

5. As Guppy Tweed, the neighborhood pot dealer, makes his rounds, he notices all the cats on Mrs. Finch's porch staring at him with giant glowing red eyeballs. Is he having one of his hallucinations? Or has he discovered the secret hideout of the witches who keep Ferndale safe from zombies? Plus, a psychic albino watchmaker and his dog.

7. How will we communicate after the Zombie Apocalypse? Everyone laughed at Gerald Kilpatrick for keeping the presses from the last days of the New York Times, but with Zombies on the prowl no one's laughing now.

8. Her nickname: Hound. Her occupation: zombie poacher. But on this futuristic Earth, zombies aren't killed; they're captured and pitted against each other in gladiatorial combat. When Hound gets bitten by a zombie, will she lose her humanity and be forced to fight other zombies for the entertainment of the rabble?

9. Bored with her unfulfilling job as a bard, Ehlana seeks answers from a barbarian priestess who tells her she is the chosen one who will save the world. Immediately she decides to seek different answers, but not before an army of zombies destroys the city.

10. Gelsey's an ambitious young ad executive with a credit stealing boss, a sassy back-talking best friend, and a cute but mysteriously shy handyman who just may be the face of her next campaign. Oh, did I mention they're all dead?

11. Joe Bob, necromancer, runs a small business selling undead slaves. When one of his subjects comes back to life instead of un-life, he needs to find the non-corpse to prove he's not responsible before zealots, grieving families and a pantheon of demigods turn him into one of his usual subjects.

13. A chocolate poodle, a sloshed (slushed?) editor, and an irrepressible writer all need a plot. What else do these have in common? The Bermuda Triangle! Also, a pilot who finds the land after time -- with zombies, intelligent goo and aliens instead of dinosaurs.

14. Professor Henchly has a theory about the brainless dolts in Economics 101. He decides not to tell Dean Rodafescu the university has a serious problem, and tries to proactively solve the problem with a spray can of insecticide, but his theory is wrong and everything goes horribly awry.

15. Gilhad, Prince of Numea, wants nothing more than to marry the lovely Ernilda and unite his war-torn land -- but when Broh, the last Prince, rises from the grave and seeks out Ernilda for his zombie bride, Gilhad must raise his own army of the undead or lose his love forever.


Late to the party? The other zombie guess the plot quizzes may be accessed by clicking on the label at the bottom of the post.

Hilarious. Are the fake plots really getting better, or is that just my lame opinion?

I think my zombie-meter died and wobbled away on it's three, very short, claw and ball feet...
I got four wrong.

My mistake to read this over lunch.
:)

I'd read any of these books, fake ones too!