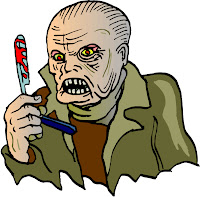 You wouldn't want to meet one in real life, but serial killers turn up in fake plots every so often. Real plots too: Five of the following plots turned out to be the actual plots of minions' novels. Which ones?

1. Combining the studies of Vlad Dracul, Jack the Ripper, Billy the Kid, Ted Bundy and Seung Hui Cho, The Academy analyzed the most violent of killers throughout the centuries and created the newest breed of serial killers. But can they also create the profilers to stop them? Game on.

2. A decade after the death of his wife in a tragic sculling incident, border patrolman Clint Fujimaki still believes she was murdered. The serial killer known as "The Drowner" hasn't sunk a victim in years, but when illegals begin bobbing up in the Rio Grande, Fujimaki has a sinking feeling that his wife's murderer has returned.

3. It sucks being named Jane Doe. It doesn't help that she's quiet as a church mouse at the morgue, where she works. It also doesn't help that she dresses like a homeless woman, especially when a serial killer starts murdering homeless women around the city. Police think she's the next Jane Doe to die. Can Jane develop some fashion sense before it's too late?

4. When the Herald goes out of business, it has a bigger effect on Sunnydale than just a couple hundred lost jobs, especially when a serial killer begins stalking the residents, and no one can get up-to-date news or check the obituaries to see who the most recent victim was.

5. Who is killing the homeless? I'm Addy. I run the shelter, and I've fallen for one of the homeless guys, but that's the least of my problems. The cops think I'm the obsessed serial killer behind all the grisly murders committed lately, here on . . . Harper Street.

6. When Jasmine has a psychic vision of her rival Marissa dying at the hands of a serial killer, she's tempted to say nothing, but eventually she tells hunky police detective Eric. Now Jasmine's having visions that indicate she should have kept her mouth shut. Has she become the killer's next target?

7. Hanna Murphy, author of the scandalous I NEED A MAN RIGHT NOW! blog, disappears and everyone assumes a serial killer was responsible, but Inspector Joyce Raines realizes there's a paranormal air-sucking hole in the Murphy plumbing -- just as she, too, is transported through it to a swampy time-space warp full of evil wizards.

8. A series of bizarre deaths--someone drowns in a pile of barley, someone has a fatal encounter with a dishwasher, etc.--has the police thinking accidents, but one psychologist realizes there's a serial killer on the loose, one he might be able to lead down the rocky path to . . . Redemption.

9. When the letters U and I turn up missing from alphabet soup cans at crime scenes, homicide detective Zack Martinez knows two things: he's on the trail of a kleptomaniac serial killer who was traumatized by a childhood word guessing game; and he'd better remember to pick up his wife's Andy Warhol comforter from Hang's Dry Cleaning.

10. Burned out after twenty years of white collar work, a yuppie quits his job and moves to a farm in Wales, where he finds peace and takes up a new hobby: torturing and slaughtering people in his . . . Chicken Shed.

11. Convicted of sixteen murders by the age of thirteen, the world's youngest serial killer, waits on death row. And if you think Mendelve's daughter Sarah was bad, wait'll I tell you about Mendelve.

12. With a brutal serial killer holding him hostage and his life depending on a game, it's not the best time for Mason to discover he lost some of the Scrabble tiles.

13. When Liz starts getting daily love letters from a complete stranger, she's flattered . . . until she reads a newspaper article about a serial killer known as The Correspondent.

14. Matchmaker Penelope Thurgood never meant to hurt anyone - it wasn't her fault that she set people up with serial killers. But now they're all dead and Penelope is scared to set anyone else up . . . until the police bring her in to help catch a new serial murderer. Will she find him before he finds her?

15. The sign on the door on the right says "ordino." The other door reads "ourtodo." The sign above both announces "Anagram Club." Lily and Nick are the only ones to know who serial killer "The Puzzler" really is. Can they solve the clues and find him... beyond Ordino?

16. Sentenced to dig trenches from dusk till dawn, serial killer Joe Ogilvie figures he's gotten off easy--until he learns his sentence will be served at the south pole, where one night lasts six months.

17. The other kids teased Omnipuplotto Smirnichovich every day of first grade and he cried so much it ruined his entire life. For second grade, his parents shorten his name to Omn Smir, but the damage is done. He goes on to become The Sobbing Serial Killer.

18. He wanted to be America's newest serial killer, but he needed an angle. It came to him one night in Santa Monica. Four hours later, Oliver Stone, Sharon Stone and "Stone" Phillips were chalk lines on the pavement.

Click the label at the bottom of the post to take the previous serial killer GTP quiz.

I don't remember seeing #5 and it sounds like something I'd read if done well.

The Scrabble one (12) was a hoot - kudos to whoever dreamed that one up.

17 too. Especially the shortened name.