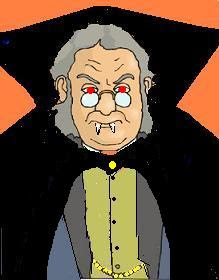 Vampires are a frequent feature in fake plots, but five of the plots below turned out to be the actual plots of minions' novels. Which ones?


1. Tommy's a student at Vampire Tech, where he takes courses like Remedial Blood Sucking, but he has a problem: his favorite food is garlic, and they don't serve garlic at the Vampire Tech cafeteria. What's an Italian vampire to do?

2. Dating was never such a pleasure. Margo is happy to be married, because it means no more limiting her garlic consumption. But how can her husband Percy take it? One more clove, and he's rushing out the door and into the arms of Jolene Trumbull, vampire librarian.

3. In a world ruled by vampires, the few remaining humans are a precious food resource. Our heroine is on the run, trying to escape a lifetime of imprisonment as a blood supply. One hunky vampire offers to help her. But can she trust him? In the new world, when a vampire finds a human, it's . . . Finders Keepers.

4. The wind brings glad tidings--a child is born unto a minor prince in the little town of Wallachia. And he shall be named Vlad. And he shall be a good man. Then a dragon shall awake and ruin everything. Also, a vampire.

5. Evan is a vampire with a problem--he can feed--and live--only by day. Unfortunately he loves Persephone, a more traditional vampire. They say opposites attract, but can these latent lovebirds overcome the barriers keeping them apart?

6. Three charred bodies turn up at the city morgue with stakes through their hearts. But, if the bodies really were vampires spontaneously combusting, there should only be ash remaining. Homicide detective Zack Martinez is on the case . . . as soon as he returns from his second honeymoon in Transylvania.

7. When the New York Vampire Clan - Big Apple Blood Suckers - hold their spring social, Scarlet Emmenecker learns more than the tango, samba and electric slide. Her hunky dance teacher introduces her to the latest craze - the Love Inferno - and she, in turn, drains his blood.

8. Banishing night seemed like a good idea at the time to magician Carl Minos. What he didn't take into account was that vampires, although minorities, were real, and they took exception. Can Carl reverse the Nightbane's effects before the vampires' sunscreen wears off?

9. Lee Trenton knows better than to be afraid of vampires. In fact, he makes a fine living off of them, running a scam mail-order coffin service. But when he gets an order from Dracula himself, which one of them will end up being the sucker?

10. When Kalinda has a one-night stand with Steve, she never dreams that she'll soon be taking him home to meet her parents. Or that Steve is a vampire. All she knows is he's great in the sack, and that makes him a keeper.

11. Dracula always wanted a pet, but dogs and cats just weren't cutting it. When he stumbles across a dragon hibernating in the Carpathians, he decides he's finally found an animal companion worthy of him. But, feeling peckish, Dracula makes the mistake of biting the dragon, creating a vampiric menace. Can he prevent the countryside from being sucked dry by . . . The Blood Dragon?

12. Abriel has powers beyond those of normal humans. Government bounty hunters are after her, so she leaves high school and takes a job babysitting child elementals at a camp run by vampires.

13. Tina has been cast in a new TV show about London vampires. Funny thing is, the male lead never comes out of his trailer unless he's on set. Tina's sure he's a real vampire. Can she confront him without getting bitten?

14. The six girls at Springdale Reform House swear never to reveal which of them is the vampire, but the zombie can't get anything straight and blurts it out. When junior counselor Tabitha Thompson realizes a third of her charges are already dead, she must decide, among other things, whether to tell Nurse Williams to skip their flu shots.

15. It's another freakin' vampire novel where he's all tortured and broody because he can't tell if he loves her or if he's just kinda hungry and she's into him because he's so mysterious but protective and he's like "We can never be together" and she's all "But I love you!" and we all know where this is going but let's face it: people never seem to get tired of this one so shall we just cut to the chase and talk price?

16. In a world where vampires no longer drink human blood, there are exceptions: Drinkers! When Cyril learns that some Drinkers may be living in town, it's up to him to investigate, and to report his findings to the World Vampire Association.

There are certain aspects of #! that are burned in my mind...

Somebody needs to write #14--that one sounds like so much fun I'd read it, even though I normally don't like vampires.

Huh. I come back from blogcation and find myself embroiled in an evil guessing game.