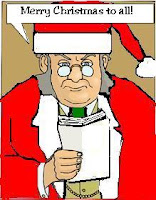 Christmas comes once a year, but it comes more often than that in fake plots. One of the plots below, however, turned out to be the actual plot of a minion's novel. Which one?

1. They were ratty, they were torn, they were holey ghosts. But now, thanks to a little help from the Spirit of Christmas Past, they're getting it all together. Demons better watch out - its the all new . . . Unholy Ghosts.

2. A guy who pees on her boots. A porn-obsessed crybaby. A cheese thief. Sofia always seems to end up with losers. Her latest boyfriend has just given her her Christmas present: a crummy loaf of bread! Is this the final straw? Or is this what she gets for moving to LA?

3. Something sinister is afoot when the insurance office does its Secret Santa drawing and everyone draws Lucretia's name. Lucretia gets 35 gifts -- and a bullet in the head. Only mailroom boy Clark Cooper can both solve the mystery and deal with the Returns office at Macy's.

5. When Santa's henchmen get tipsy on grog left beside the tree on Christmas Eve and end up busted for burglary, they soon realize the only way to survive incarceration is to form their own gang. They can't be "elves" any more. So they pierce their substantial pointy ears and swagger around, calling themselves the Holiday Lords.

6. Tina is beginning to hate Christmas. Every year it's the same two weeks of stress-inducing hell. Her family, in-laws, her family, in-laws. That is, until she finds out that she's married into the richest, most powerful group of witches and warlocks in the country. Can Tina convince them to halt their assault on the holidays and just relax already?

7. Christmastime, gentle snow falls, merry Santas, bludgeoned girls whose hair falls over their crushed skulls like strands of silver . . . it's just another day for Rudolph.

8. Secret Santa is all fun and games, until Hayley opens her package and finds a human hand. Should she report it to the cops or investigate herself? How hard can it be to spot someone who's missing a hand?

9. When Santa and the reindeer crash on Christmas Eve, all the cavemen are excited about the sudden abundance of free food. Mugoo fires up the barbeque while Santa searches the snow for his broken time turner so he can get back to the right century and save Christmas. Plus, seven angry elves.

Click the label at the bottom of the post to check out the previous Christmas Guess the Plot Quiz.