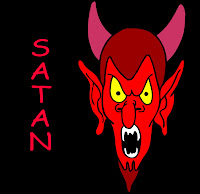 Satan pops up now and then in fake plots, but three of the plots below turned out to be the actual plots of minions' novels. Which ones?


1. Kicked out of heaven, guardian angel Adora is now a high school student. When her brother--Lucifer--shows up wanting the soul of her babysitting charge, Adora refuses to give her up. But can she win this battle in the age-old war between good and evil in time to make it to the prom?

3. Newly-minted literature professor Christine LeBrock knew her department was full of the usual gossip & politics. What she wasn't expecting was a full-blown Satanic cult operating beneath Childers Hall. Is sacrificing a bright senior a fair price for tenure?

4. When Ellen flees her strait-laced family and meets a handsome stranger, she misunderstands his introduction, thinking him in the underwear business. When she discovers that he's actually the son of Satan, will she be pleased or disappointed?

5. There's a new kid at Grover Cleveland Middle School: Damien Shatan, a quiet, dark-eyed boy who never speaks to anyone. Frederica Collins, math whiz and new herself, decides to try and bring him out of his shell. What will happen when she discovers he isn't just different--he's actually from Hell?

6. It's taken Nancy fifteen years to get up a head of anger against her unfaithful husband, but now that her fuse is lit, she's on the rampage. Will Detective Crusoe work out that the women burning on upside-down crosses aren't the work of the local Satanists?

7. When an editor tells Kiki the only way she'll ever be published is if she sells her soul to the devil in exchange for some talent, she does just that. Years later, after she hits the New York Times Bestseller List, Satan comes to collect, and Kiki realizes that maybe it wasn't worth it. She makes another deal. Now the only way she can save her soul is to write a book good enough to make Satan himself cry.

8. Mortally wounded in a battle between Good and Evil, Morvin discovers he can recover and continue the fight by shoving two quarters up his ass. Can he defeat the spawn of Satan before running out of coins or developing piles?

9. When Satan finds himself having a mid-life crisis, he has two choices: He'll either have to fall in love and start performing acts of kindness . . . or buy a Porsche.

10. Tom Stop figured he'd boosted the sweetest ride on the streets. But, as he pulled out of the parking lot at Club 666 and the painted flames along the sides burst into real flames, he began to think he'd made a mistake. Now he's got 24 hours to find the car's owner or he'll discover that "highway to hell" isn't just a figure of speech.

11. Archangels Michael and Gabriel wager to see who gets the unwanted assignment of babysitting the ditzy heiress Claire Sheraton before Satan can tempt her into having his child and creating a horrible chain of disastrous events marking the end of humanity.

12. After being told she was special all her life, Tiffany Barns did not expect to go to Hell. But she did. After burning for a week, she's so obnoxious about the unfairness of it all, even Satan wants to kick her out. So he bets God she'd be just as bad the second time around.

13. When the devil offers to trade in his 2008 Porsche for a 2004 Prius--and the salesman's soul--Honest Bob doesn't think twice about closing the deal. After all, has any car salesman ever made it to the Pearly Gates anyway?

14. As Jesus preaches his message of peace, a lowly fisherman leads a rebellion against the devil and his demon army. Can one fisherman save all the tortured souls of hell from damnation? And if he does, will Jesus take all the credit?

15. A superhero team consisting of the Father, the Son and the Holy Ghost fight crime in Vatican City. Not a bad gig--until the villain known as the Antichrist sets up shop next to St. Peter's. Can our heroes take him down without causing Armageddon?


Click the label below to revisit the 1st Satan GTP quiz.

I got two out of three.

I got none out of all of them.