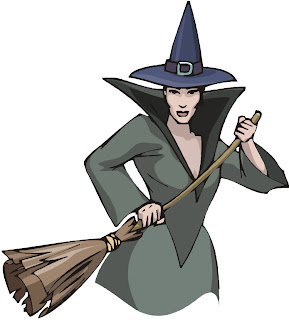 The woman disturbed me.

Not so much by her presence, it was normal for women to present themselves at the hall with claims against neighbours or even their own family, but this woman's very statement reeked off wrongness. Despite this, I managed to remain calm. "Would you care to repeat what you just said?"

She smiled. "I have performed acts of witchery."

Which was a lie. A woman is too pure to be corrupted by demons. When I stated this, she again smiled. "I chose to."

Another lie. "No one chooses to consort with demons. They are recruited against their will and need to be rescued."

At my words, she no longer smiled, but neither did her face register the fear that I expected. If anything, she seemed concerned that we would deny her claim.

At least it would be an easy claim to find the lie in. Finding truth within the statements of demonisers and witches was my expertise, although the wretches I usually dealt with tried to deny involvement, not admit to it.

Still, the process would be the same.

The woman had a curious expression on her face as she held up a long broom.

"I sometimes ride on this."

"My own grandchild has a hobby horse," I countered.

"My skin is burned with the seal of the demon Norklookchabub."

"Are you sure you didn't burn your hand while cooking a stew?"

"I wear only black dresses," she declared.

"Every woman has a simple black dress."

The woman paused, unsure of herself for the first time. I smiled inwardly. I always got the best of them in time. "So," she said, "no matter what I say, you are convinced I'm not a witch?"

"It is the power of simple reason, madam."

The woman mumbled slowly as she left: "Man. The Inquisition ain't what it used to be."
Opening: Xenith.....Continuation: Pacatrue
Posted by Evil Editor at 7:55 AM


It would all be about avoiding depositions and getting a settlement as fast as possible.

I sighed and silently thanked God I was her lawyer and not her ex-husband's. The poor schmuck - or soon to be.

Obviously it's only a small sample, but reading this, I wonder if it wouldn't be better written in third person. While first gives great opportunities to connect with a character, I'm not feeling much of a character here at present. Such a distanced portrayal works better in third, imo.

Nothing cries out for change, but as long as I'm here: I'd like to think this is the first time this has ever happened to the narrator. Thus how can he be sure it will "be an easy claim to find the lie in"? And why does he say others "usually" tried to deny involvement, not admit to it? I would think they always had tried to deny involvement in the past. Finally, "admit" may imply there's been an accusation; this woman seems to be bragging that she's a witch. So you could change the next-to-last paragraph to:

Finding truth within the statements of demonisers and witches was my expertise, but the wretches I dealt with always tried to deny involvement, not boast of it.

I have to agree with buffy. I did like that it opens in the middle of conflict, I'd want to see some character or some action, quick.

LOL--Paca's continuation!!!
The llama is on a roll. I'm seeing jokes scattered about the blogosphere.

Okay, my first attempt to actually make a suggestion to somebody here. Watch as I'm being discredited:

I like this and it's got an interesting premise (witches, cool, hooray! ... Not witches... waaait... whatnow?), but I'd lead with

"I have performed acts of witchery."

Because "The woman disturbed me." and what follows is too much show and not enough tell. Like four vampire brothers said, action is good for openings.

Wait... vampire brothers - witches... vampires... squirrels buffys... church ladies... this comments page is confusing me. Now I'm afraid I'm gonna be eaten by werewolves... or even the fabled donjtgur, what a bleak prospect for my future... *rambleramble*

Off should be of in the second paragraph.

I think this is a great place to start. I did like EE's suggestion and I think you need 'of' not 'off' in that first para.

I do slightly miss a sense of place - you mention 'hall' but by the end of the conversation I'm feeling slightly disoriented, because there is no sense of the environment, or of their physical placement in relation to one another.

Having done considerable research on witchcraft in fact and fiction (actually read the Malleus Maleficarum), I find that this doesn't ring true. It only makes sense to me if it's supposed to be some alternate-universe version of the Inquisition.

In the first place, witch-hunters usually didn't bother with simple interrogation: they went straight to the torture. (And in Scotland, at least, pulling out the accused's fingernails with pliers didn't count as torture; it was normal interrogation.)

In the second place, people simply didn't get acquitted, let alone have the Inquisitor/witchfinder bend over backwards to disprove the charge (or, in this case, boast). Simply to be accused (and usually by someone being tortured who will name anyone they can think of just to stop the pain) meant inevitable conviction, not least because the possessions of the condemned witch were divided among the church, the state, and the accuser. This is why so many victims of the witch hunts were not the dotty old ladies we usually think of but people of considerable substance.

3. In the third place, these are not the usual "crimes" involved in witchcraft charges, which generally had to do with fertility, either blighting crops or livestock, preventing conception, or causing difficulties in childbirth.

In short, I can't take the proposed story seriously because it's too unrealistic in the way it deals with witchcraft.

"but this woman's very statement reeked off wrongness..." here - wrongness just seems, well, wrong. I'm too tired right now to come up with an alternative for 'wrongness', but I think it would be good to change it.

And: "At my words, she no longer smiled, but neither did her face register the fear that I expected."
There's just something about this, from "but neither" that sounds stilted to me. Don't know how to explain it.

My guess is the narrator is a rod-up-his-butt type, so maybe stilted works for him?

Paca, you're on fire. Nice to see you back in action.

Not only does my continuation dissolve into the ether, but my complaint about it disappears, too!

EE, are you trying to tell me I'm not welcome here anymore?! *sniff* *sniff*

I'm sorry to report that in this case they really did disappear into the ether. I never saw them, and my email search function shows no record of them. Resend, please.

Robin: He is! So I guess if he's coming across stilted, it must be right ;)

Talpianna: it is an alternate world, although that's not at all obvious out of context

Mckoala: (small voice)You're right(end small voice) I like to think it gets better in next bit though :) but that's my second biggest writing issue at the moment.

Phoenix, I've tried to post a comment to this beginning twice, pursuant to the administrator's approval, along with an exercise entry...also wondered if I had offended EE somehow...

Maybe if a little action/description were added to the conversation, it might remove that sense of distance the talking heads create.

I think the opening has potential. The "witch" sounds like strong, compelling character. And it's an interesting premise. I think you've received great suggestions for improvement here!

I'm sorry to report that in this case they really did disappear into the ether.

Erm, so does that mean if they hadn't really disappeared and you were in truth ignoring us, you'd be happy to report that?

Always thinking the worst of poor EE. I was merely sympathizing, knowing that instead of waiting for me to find your emails and publish them, you would have to retype them.

Thanks Bernita (I might try that), Precie, Squirrel, EE (I had been fussing over that bit without why) and Four Vampire Brothers. V. helpful

My longer ether-lost version in a nutshell:

I liked this a lot and would definitely read on.

I think he's an officious prick who's too sure of himself. That's what I get from "be an easy claim to find the lie in".

I am sorry, but "New Beginning 416"is funny as hell. "...If you throw me in the lake, I'll float." I laughed out loud. I guess I am showing my ignorance here (I am new to your site.) Talpiana, are you serious? Really? Really?? Please, this is writing for crying out loud; made up stuff. Am I the only one. You've read Malleus Maleficrum! Please! For Christ's sake, don't do that to me. I almost wet my pants I laughed so hard. Thank you.