Satan and the Antichrist 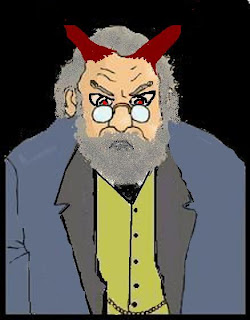 Ten fake plots starring the evil ones. Plus two actual plots from minions' novels. Which are the real ones?


1. Terminal cancer patient Steve Marsden makes a deal with the devil: his eternal soul in exchange for 7665 extra days of life, just long enough to see his infant daughter grow up and get married. But Satan mischievously grants Steve 7665 dog days, which pass at seven times the speed of human days. Can Steve get his daughter married off by the age of three?

2. Bob is a pimply, poor-mouthed nerd, but when Satan comes calling, Bob sells his soul in order to become his opposite in every way. When his silver-tongued opposite brings the world to the brink of destruction, can Bob overcome laws of physics to save humanity . . . and the only girl who liked him as a nerd?

3. Satan couldn't believe it when his performance review came in. No longer would the board of directors allow him to reign in hell. Now he must serve in Heaven. And God is a lousy tipper.

4. When movie director Marcus Bray is told that angelic Annika Angstrom, the child star of his latest film, is the Antichrist, he assumes that means she's a typical Hollywood spoiled brat--until a series of grisly “accidents” start killing off the cast and crew. Is a hit movie worth letting Annika achieve dominion over the world?

5. Hell just wasn't any fun. Sure it sounded good when Satan used that famous recruiting line: It's better to rule in Hell than to serve in Heaven. The trouble was, Satan was the only one who did any ruling. Everyone else suffered eternal torment. Can Elgin find that elusive chink in the brimstone that will allow him to escape? Also, a clock that runs backwards.

6. Jury duty in heaven is hell. After 1,562,354 years, Molly learns she still can't talk about Satan's trial after his fall from heaven . . . which means she will never, ever get to be on Oprah. This leads her to the biggest existential crisis she has ever faced. Luckily for her, she has plenty of time to think about it.

7. In the cutthroat world of fashion design, Ellen DeLong has always been second rate. That is, until she makes a deal with Satan and gains the magical Shears of Endor.

8. Nine-year-old Ashley-Blanche Carmichael leaves Catholic school to follow her dream of stardom, only to land in the middle of the most bizarre child beauty pageant ever. Can the nuns of St. Wendelyn's keep her from winning the title of . . . The Prettiest Little Antichrist?

9. He was the most amazing man she ever knew: smart, strong, and sexy. But if Maribel bears the child of Satan, will he love her faithfully forever, or will he leave her only . . . A Legacy of Ashes?

10. The first time didn't go so well. The second, well, that whole Hiroshima thing put paid to it. But Satan is back and ready for more, and this time he's got a plan he's sure will succeed.

11. Six years ago Marlene was seduced by Satan himself. Now she's readying their daughter Firenza to compete in beauty pageants. But she needs the father's permission. Will she discover that there are some things too horrifying for even Satan?

12. A cloning experiment in Area 51 creates a hybrid of a human and an alien, a hybrid that proves to be . . . the Antichrist!

That is one scaaary picture, EE.