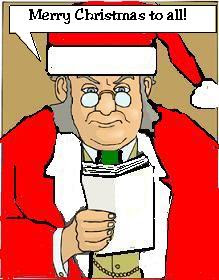 The fake plots below appeared on this blog during the past year. But not all of them proved to be fake. Which two are the actual plots of minions' novels?


1. When “undocumented worker” Carlos Cruz shows up at the day labor pool on Christmas Eve, the only guy offering work is a pequeno duende with bells on his shoes. Driving the sleigh is no problem, but will Christmas be ruined when Carlos has to take a leak at 30,000 feet? The kid who asked for the jar of marbles will probably think so.

2. A pearl for Christmas, a ruby for Valentine's, and an emerald for her birthday. Sue's husband sure is spending hard to assure her that his cheating days are over. But will the sparkle of her Columbus Day sapphire blind her to his sudden increase in "business trips"?

3. Evelyn told her mother-in-law that she wears a size 12, when a 16 is closer to the truth. With the family reunion drawing near, will Evelyn resign herself to wearing the ill-fitting gifts her mother-in-law sent her for Christmas, or will she find a way to escape. . . The Lies that Bind?

4. Poverty and creativity went hand in hand for Pearl, until her homemade Christmas ornaments became big sellers in Winston-Salem. Success is a puff away, but can she find the right partner for her Cigarette Angel factory or will her plans go up in smoke?

5. Charlotte has a thing for holidays. She poisoned the marshmallow chicks in her first husband's Easter basket, strangled her second husband with the ribbon from the Valentine's Day chocolate box, and suffocated her third with the helium balloons at his own birthday party. Now, as Christmas approaches, hubby #4 wonders why that package under the tree is ticking.

6. Every year, Carrie's creepy boss has groped and French-kissed her at the office holiday party. With the antidote in her hip pocket, she waits near the mistletoe and keeps her tongue away from her poisoned lipstick. By this time next year, she'll be the VP doing the groping.

7. Christmas at the estate of Lord Ajax was supposed to be the climax of this year's social season-- and the moment Lord Ajax proposes to her. But Clarissa discovers she is not to be the recipient of a marriage proposal, when she discovers her Ajax under the mistletoe, locked in the embrace of . . . her brother.

8. It's Christmas, and Christine has no one to spend it with--until she gets drawn into an international drug conspiracy by hunky doctor David McLeod. Now that she's found true love, can she stay alive long enough to enjoy it? Also, Johnny Cash.

9. What started as an innocent kiss at the Devorson’s posh Christmas party turns into an obsession that leaves a trail of bodies from New York to Nevada. Beautiful detective Mary Sky must find the X-mas Killer, following the clues he leaves her, before Christmas rolls around again and his knife finds her under the Mistletoe.

10. Kelly Coosman volunteered to work the kissing booth for the parish Christmas Gala…it was the least she could do after Father McElroy rescued her from the streets of Chicago. But she’s been on her feet for fourteen hours straight, smooching hundreds of nicotine-fouled old men with rotten yellow teeth, and she's thinking prostitution wasn't so bad after all.

11. Confident his parents won't be getting him a Christmas present, Nate runs away from home and moves into Wal-Mart. When a night security guard finds him and realizes he's the missing boy she read about in the newspaper, she sets up a tent, gets Nate a sleeping bag, and helps him set up a household. Hey, the place gets lonely at night.

12. Investigative journalist Shiela Nagig is working on an expose of the child beauty contest circuit when the Archdiocese of Sheboygan hires her to find out why six of their little angels from the Christmas Play have mysteriously disappeared along with a valuable altarpiece.

The real plots are

Merry Christmas - the day after. It still counts, I think.