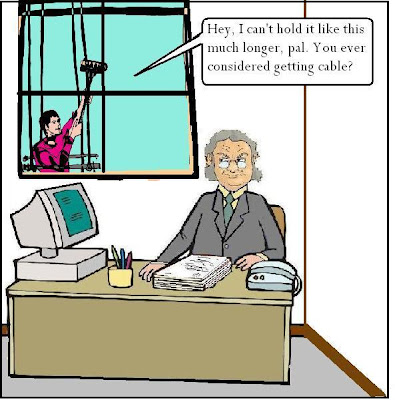 Your caption on the next cartoon! Link in sidebar.
Posted by Evil Editor at 7:24 AM

Senor Evil, there's a meme going around where people post photos of their workspaces. Would you tease us with a photo of your desk, pretty please?

There's nothing on the glass, pal. I'm afraid you really do live in Cincinnati.--anon.

Look, matey, all I'm saying is I don't think the author has successfully synthesised the Diocletian aspects with the Platonic mores. --Buffy

You got a light pal? If I don't get this torch to Beijing, it's my ass. --anon

Where's the lady who explains the cartoons?
I don't get this one....

Could be the long island ice tea though. But I don't think so. That usually sharpens my brain.

Senor Evil, there's a meme going around where people post photos of their workspaces. Would you tease us with a photo of your desk, pretty please?~

I noticed a thread at another place doing that. I was thinking about taking a picture of my desk, but I'm sure it would frighten sane people.

It would be interesting to see EE's, though. I'm thinking nice wood. If it's chrome and glass, I would be terribly disappointed.

Ah, that anon comment was mine. I apparently have the shakes again and hit anon.

The window cleaner is holding up Evil's aerial.

HA! Haven't spent part of my youth as a human antenna (sometimes there's no substitute for human contact)for my brothers' viewing pleasure,I got this one without the venerable Mrs. V, but I think I would've had instant mirth if the thing the window washer holds were round and satellite dish-shaped. But that's just me.

It sort of looks like the old strip of foil on the rabbit ears to me, so I didn't need the dish shape. But that's dating myself...

If it doesn't look like a squeegee, it's not funny. Most of the humor in these cartoons comes with the unexpected interpretation. If the guy's holding a satellite dish, it doesn't even need a caption.