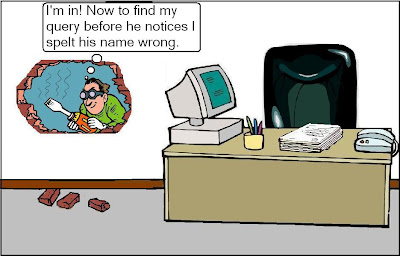 Your caption on the next cartoon! Link in sidebar.
Posted by Evil Editor at 10:56 AM


"How about that. I broke into publishing, and didn't even need a manuscript."--Ulysses

This has some nice layering. To undo the damage he's already done, he winds up doing even more damage.

Hah! Not an evil editor in sight, either.

Unofficial records show 20 cartoons with no sign of EE, and 11in which the only sign is his picture on the cover of Novel Deviations.

I can see that level of panic setting in. I really can.

Yes, but what do the official records show?

Data interpretation is somewhat subjective, but they appear to show that it's all about me.

As it should be.

Well, aren't most of us kind of anonymous?

That last comment was in response to r. lyle wolfe, by the way. Hope blogger didn't eat it, so it makes sense.

Data interpretation is somewhat subjective, but they appear to show that it's all about me.~

Tell me it ain't so!

I can't see this cartoon at all. For some reason blogger won't load it.

This however, from Reuters, caught my eye today. I AM NEVER THIS BORED!...

Bored at the urinal? Kill some aliens

BRUSSELS - Two Belgian beer fans have launched a video game named 'Place to Pee', which allows players to slalom down ski slopes or kill aliens while relieving themselves at urinals.

Werner Dupont, a software developer, and Bart Geraets, an electrical engineer, got the idea while drinking Belgian trappist beers, they told Reuters Television at a local festival on Sunday.

"This thing had to be invented by Belgian people and that's what we are," they said.

The 'Place to Pee' booth is designed for two users at a time and offers two games -- blowing up aliens in outer space or skiing down a virtual slope. Gamers hit their target by aiming at sensors positioned on either side of the urinal.

A specially designed paper cone allows women to play too, the inventors say.

Their 'Place to Pee' logo resembles 'Manneken Pis', the little urinating boy fountain that is among Brussels' top sightseeing attractions.

Yup, there's nothing quite like a urinal based game for two guys, based on blowing aliens.

I think the game was invented by THESE Belgians:

In other news, about an hour ago, I cracked the code on a chapter edit that was making me crazy.

And yeah, ril. I want some chocolate - but summer's coming on fast, so...

I once watched an Equestrian event that had one of these Jumping obstacles. They are impressive when they take to the air and nearly fly. Somewhere I have a still picture of that.

But no, I doubt them mean those studs. These are the guys who specialize in pissing over buildings and other drunken pastimes.

Whatever next? Bomb Atlantis?

Dave, if you want to see beautiful horses performing magnificently, see if you can find film of the Lipizzaners performing the "airs above the ground."

This has some nice layering. To undo the damage he's already done, he winds up doing even more damage.

Ah, the cartoon caption as literature.

Dave, if you want to see beautiful horses performing magnificently, see if you can find film of the Lipizzaners performing the "airs above the ground."

I've seen the Lippizaners when they toured through Pittsburgh. I've been hauled to the Steeplechase races too. Well, I should say, my camera was hauled with me attached to it. My brother has horses, a nieghbor has horses. Another neighbors has donkeys. There are horse stables and a blacksmith all around where I live.

Me, I consider a horse a large, smelly source of fertilizer. wink, wink, wink...

As for "Debbie's Farmyard Frolics" ... I think I'll pass.

My brother had some of his horses at one of the local parks and he left a mare (in heat) with a stallion overnight. Object - a colt. Well, sometime around midnight the local police phoned and said that a woman complained that the horses were mating openly, in public, in a field. It's kinda hard for two horses to hide under a blanket or in a motel room (that's what the police told her).

That's all the barnyard frolics I need to know about. What Debbie does is best left in the realm of the unknown.