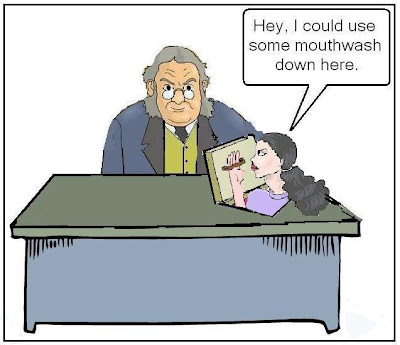 That. Is. Hilarious. But sick.

And Mrs. V's explanation cracked me up.

I forgot to say: Chowder? Now there's a euphemism I hadn't heard before!

What writtenwyrdd said. Both of them.

That's quite a smile EE has on his face there...

The word "chowder" has never sounded so vile.

I'm confused. When I surfed by earlier, the personal assistant was both named and blonde.

I suspect there has been an edit...

Agreed with ril. The smile on EE's face is hysterical.

Damn. I really believed it was clam chowder she was talking about, until I saw that smile.
And then it hit me.

Good one, both of you.

Mrs. V. is a lot sexier than I imagined her. I thought she'd be old. But I like her joke.