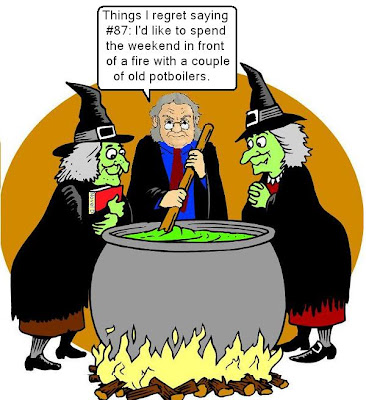 Your caption on the next cartoon! Link in sidebar.
Posted by Evil Editor at 8:00 PM

I think I need Mrs. V on this one.

It could be worse, they could take out the tits and titter. Even Worser, they could be man-tits.
(TITTER: verb & noun
she caused a few titters | the people at out table started to titter giggle, snicker, twitter, tee-hee, chuckle, laugh, chortle.)

Anon- did you see that the pot (cauldron by any other name) is boiling?

Mrs.V. is unavailable, but if she were here she'd suggest Googling "potboiler" to see what EE was actually wishing for. You can see easily enough what he got.

Ah. EE should give me a call, I'll whip out a couple for him.

Finally we got a caption for this one! Brilliant, too!

Who doesn't know what a potboiler is? You're writers, use a dictionary, guys.

You could use a dictionary. Or you can just google define:potboiler and find this: "a literary composition of poor quality that was written quickly to make money (to boil the pot)"

I thought it was a wonderful caption.

Mind you, Mrs. V in ironic mode is good value too.

Dave, it's now a contest to decide whether you're being more offensive than patronising, or vice versa.

You must have to work at it.