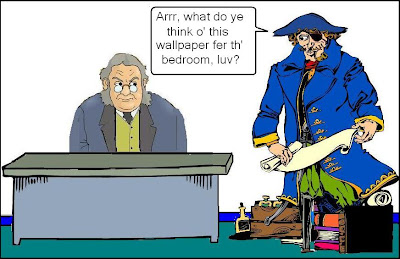 Your caption on the next cartoon! Link in sidebar.
Posted by Evil Editor at 9:58 AM

How did you ever choose? Many mini-ha-has and a couple of guffaws in this batch! Well done minions and no need for Mrs. V here!!!

But what if the way that I think it is funny isn't the way that it is actually supposed to be funny? I could be laughing for the wrong reason.

The one you chose had me falling off the chair laughing. A lot of good ones, though.

ROFL. The minions have outdone themselves on this one.

not too shabby, that one ;) lol

Wow - these are good. EE can afford to be picky - but it had to be hard to choose.

I know that the California Supreme Court might just have OK'ed Same-Sex Marriage, but this combo of hairiness is a match made not in California, but a much hotter place known by such terms as Perdition, Sheol, Acheron and The Inferno.

I dated a (purported) bisexual a while back. OK. It was hard competing.

But you know what they say. Competition brings out the best in people. Yeah.

I can take that fucking pirate out, with sheer staying power.