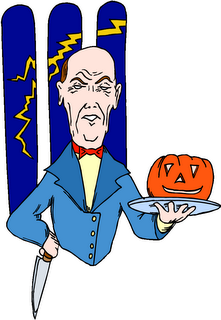 Aunt Zinnea's house was full of goblins, dinosaurs, monsters. They were dunking for apples in the basement. They were galloping through the house just fast enough to trip over their own tails and fall crying to the carpet. They cowered in fear of the ghosts and skeletons, clinging to the legs of adults. Grandma Zabronski was holding court in the living room, telling stories and granting wishes by waving a glass swizzle stick and throwing pinches of glitter. Her friend, Mrs. Harris, was reading palms. I appeared as a mermaid, in a glimmering blue gown.

The little darlings loved my ogre cookies. It was wonderful to watch them bite the tiny limbs off and gnaw the big fat heads — which bore a striking resemblance to my boss. The sight was nearly as comforting as jabbing pins in that voodoo doll.

But not nearly as much fun as the kids would have with Mr. O’Gorman’s actual body. I shimmered through the mob and slipped into the darkness of Grandma Zabronski’s bedroom. O’Gorman cringed and averted his eyes. I smiled tenderly as I loosened the gag and held a slender finger to my lips to signal, Quiet.

“Why? Why, Zelda?” O’Gorman’s whisper was hoarse and urgent.

I reached into the bag of candy stashed beside Grandma Zabronski’s night stand. “Open wide, boss. The children were promised an ogre piñata."

Another continuation, with the same punch line, this one from ril:

"Okay, kids..." I clapped my hands and did a gather round hand signal. I was soon surrounded by a crowd of jostling, sugar rushed little monsters. "Time to go outside..."

I had a laundry basket full of pint-sized, aluminum little-league bats; I handed one to each child as they headed for the kitchen door.

I glanced out the window at the pinata hanging from the apple tree. Yes, that pinata exactly like my boss, too.

I hoped the snaggle-toothed sonofabitch still had his pockets stuffed with candy, 'cause the kids weren't going to stop 'til they got some...

It's too past tense and too many words, but this opening is also fun and engaging. Too many "theys" too many lists. But, still fun. Therefore, all is forgiven.

at least I hope this is a happy, cheery and fun novel. Punch it up and make the reader smile.

Yeah, but the one you chose was better. Nice one, CLD.

I read the first few sentences and the song "Monster Mash" played in my head for the rest of the piece.

The first paragraph sets the mood well, but just goes on to long---keep it short and sweet, to get us to the promising second paragraph (voodoo cookies of the boss, mm, yummy).

I like the rhythm of the prose; the repetitive sound of the sentences beginning with "they" helps build the world of the story for me, and gives me an entry into the thoughts of the narrator.

The picture I have of "Grandma Zabronski ...holding court in the living room" is a good one.

Being put on notice in the second paragraph that there's more going on that meets the eye, makes me want to read more.

The continuation is really good, too.

I like a little cuteness, but I'm glad the opening quickly brought in the hatred of the evil boss. That's intriguing.

I'm with the contingent that finds the first paragraph a little too wordy. I'd also like the sentences to keep the same construction, i.e.: "They were dunking for apples... They were galloping through the house... They were cowering in fear..."

But if you do that, some other commentator will probably come along and say the sentence structure is too monotonous. :)

This sounds like the kind of thing I'd enjoy reading: a pretty pink coating around a piquant wicked center.

Thank you, ril--it got better after Mr. Evil got a hold of it.

I love yours for the pint-sized aluminum bats of death.