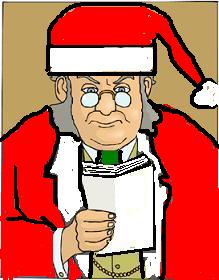 Guess the Plots have featured Christmas from time to time. But the ones below weren't all fakes. Which were the actual plots of novels whose queries appeared on Evil Editor?


1. Sick of his stressful job guarding a labyrinth, the Minotaur applies for a position pulling a sleigh. Can the taurine recluse learn to be jolly and get the job before Theseus finds him?

2. Time traveler Giovanni intercepts the Magi outside of Bethlehem and replaces the frankincense with sensimilla, dooming Jesus to be forever pictured as a long-haired hippie.

3. When Mark messes up his solo in the Christmas musical, his dad is so upset with him he crashes the family car into a gasoline tanker truck on a foggy bridge while driving home.

4. At Christmas, Mandi and Daniel each make great sacrifices in hopes of providing the other with happiness. Will their sacrifices tragically render their gifts useless? Or will a robot MAGIcally save the day with his Deus ex Machina appearance?

5. The true story of what happened that fateful night when three rich, swarthy, lost travelers asked for directions to the stable, but could not speak Italian.

6. Abandoning his family on Christmas day is the only decent thing Jeffrey's done for them in years. At least he didn't take all the presents with him.

7. While following yonder star, the three wise men find themselves in Rome. Lost and confused, they must depend on a senile mapmaker to get them back on their path to destiny.

8. Papa regrets telling the Santa Claus at Macy's what he REALLY wants for Christmas . . . when he discovers Santa is really an undercover vice squad cop.

9. Nerdish Ferdinand Turnbull postpones his search for his father in order to pimp for all the hos in Bethlehem.

EE, I love your hot new outfit! But where's the huge bag of rejection letters?

Ogre is soaking in the tub, filled with eggnog. And it's not even OUR holiday...

That, and the merry shoppers managed to lift $100 out of Nut's pocket, once again. Always at Christmas. Oh, well...

Hope you all have better holidays, though.

Nut fades away into the holiday oblivion...

Merry Christmahanukkwanzakah. Go on. Say it out loud. I dare you.

Now that I am paying attention, the likeness is remarkable.

Once again I amaze myself and remember one (#3). The others? -JTC