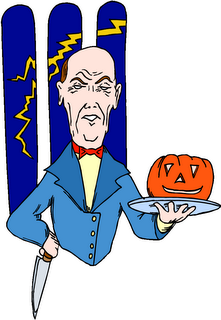 Miss Amelia Pettipants was out for her morning constitutional when the rains came. She started to open her brolly, only to realize she'd brought her cane. Rain hadn't been in the forecast. As she scurried toward home, Mrs. Azalea Owlsby passed in her Bentley, no offer of a ride. Didn't even slow down.

I'll just wait it out in the church, Miss Pettipants thought. But the rain fell harder, and she realized that to keep from getting fully drenched, she would have to duck into the phone booth. She pulled open the fogged-up door. And out flopped a body, face down into a mud puddle. My goodness, she thought, must this happen every time I use this phone booth?

At least she had access to a phone, and lost no time dialing the police. Then she struggled to flip over the body--no easy task with the lower half still inside the booth. She eventually succeeded, and let the rain wash the mud from the victim's face. It was Jeremy Owlsby, Azalea's son, and the village idiot.

Amelia considered dialing up Mrs. Owlsby, but at that moment Jefferson Davis Coatesworth-Hayes, a cop who had just turned 30 yesterday, came running across the road from the police station. "

Nice day," he said to Miss Pettipants. "What've we got 'ere?"

"It's Jeremy," she answered. "He was dead in the phone booth."

"This phone booth has seen more murders than the mystery section at the library. It was murder? Or was the booth struck by lightning? Hello. What's this in 'is 'and?" He pulled a sheet of paper from Jeremy's hand. "Maybe it's a suicide note," he said, unfolding it. But the heavy rain made the ink run, and by the time Coatesworth-Hayes reached the paper into the dry phone booth, there was nothing left except the letters "Dr."

Perhaps he had an errand at the dry cleaners," the policeman said.

"Maybe he was naming his killer," Miss Pettipants offered. "Maybe this is all that remains of the name Drusilla Heatherington-Smythe Blatherstrop."

"Or Dr. Bensonhurst-Whyte. There may be a clue in his pockets. Let's get him back in the phone booth." They lifted him up and stood him inside the booth, then crammed in with him, barely managing to close the door. "Can you reach his pockets?" Miss Pettipants asked.

"Think so. Hello. That's odd." Struggling in the confined space, the policeman showed Miss Pettipants what he had found in Owlsby’s pocket: a thin strip of leather with a buckle and a bell attached.

"Hmm, that is interesting," Miss Pettipants said, thoughtfully. "That strap appears to match these marks around his neck."

"My goodness, you’re right. He was strangled with this pet collar!"

"And what do you notice about his trousers, Constable?"

"I see what you mean," Coatesworth-Hayes said, looking down at Owlsby’s light coloured slacks. "They’re covered in fine, dark hairs."

Coatesworth-Hayes grunted as he repositioned himself to get a better look at the trousers. "How odd. He’s wearing bicycle clips. But where’s his bike?"

"Precisely. I think everything is clear, now."

"Clear, Miss Pettipants? To me it’s as clear as mud."

"Interesting you should say that, Constable," and Coatesworth-Hayes recognized the familiar gleam in Miss Pettipants’s eyes. "When I found young Jeremy here, his face was covered in a dull, red mud."

"But the earth around here is mostly grey clay."

"Correct, officer. Except near the murky pond, where the soil is more sandy; and if memory serves me correctly, there is a seldom-used bicycle trail in the vicinity of the pond."

"You said everything was clear, Miss Pettipants," Coatesworth-Hayes said. "Including the killer's identity?"

"Seven times district champion at the Snicketton Cat Show. Jeremy was jealous of her success. So he obtained a kitten just like hers and lavished it with every attention to make it look exactly like Binky’s Fluffina. And sure enough, this year, he won; and Fluffina came in second."

"But," Coatesworth-Hayes said, "if they looked exactly the same, why wasn’t it a draw?"

"The strength of the pedigree, Constable. Owlsby’s cat had a stronger family line. Very important for a Devon Rex."

"Exactly, Constable." Miss Pettipants held up the paper they had found in Owlsby’s hand. "This paper is the pedigree certificate for a Devon Rex cat. But the ink has washed away. It’s a forgery."

"And Miss Hardacre found out that Owlsby had cheated."

"Indeed. I suspect that Jeremy cycled to Binky’s house to gloat. She looked at the pedigree certificate and realized that it was a fake. In a fit of rage, she strangled Owlsby with Fluffina’s collar, then drove him into town and stuffed him in the phone booth."

Just then the phone booth door opened; the body flopped to the ground once more. Constable Tom Hardbottom was standing outside in the dwindling rain, a quizzical look on his face. "What’s going on 'ere, then?" he asked.

These Pettipants mysteries are like going to a carnival. I know I'm going to get dizzy and nauseous, but I get on the ride anyway. -JTC

I think someone stole my cotton candy

You know, after reading that,
can I say the line that Leslie Nielson says as he gazes at Prescilla Pressley up a ladder holding a large stuffed animal: "That's a mighty fine stuffed beaver you got there, miss."

Well, i thoroughly enjoyed these. Thanks to EE, Kate and all who contributed for the laugh. I hope we have not seen the last of Miss Pettipants!

I also hope it wasn't left to EE to ghostwrite all the conclusions as well as his two openings?