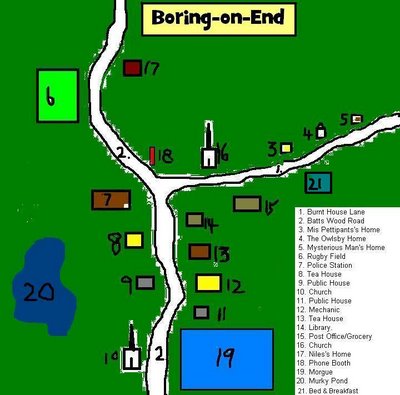 Same thought I had, morgue is the biggest building in town.

I wonder why Boring-On-End has the highest murder rate in the UK?

Hooray, a map! I like that EE has a practical turn of mind. I was just thinking 'We really need to agree on mundane details like what street she lives on'.

Hopefully that map is not the entire village. If it is, that's a lot of churches per person.

Why is the morgue so big?
Well, you wouldn't want your loved one's autopsy to be done in a cheesy, little backyard tool shack, would you?
Autopsies require high ceilings, large windows and one huge stainless steel table.

Awww.. and to think that I just posted a large section on the geography -- the post isn't even up yet, but there's a map already made, invalidating much of my post.

Oh, I should add:

Somewhere in here we need "home of the cranky lower-class guy that the police chief is always wrongly accusing of the crime", and a combination bank/jewelry store/VFW post (for robberies gone awry -- or did they?). Also, a whirlygig maker.

I take it that Niles is a hermit since he lives so far out.

Has anyone ever drowned in the pond? And the phone booth, so strategically located. LOL LOL.

Loved the morgue, too.

I guess it's only me that has a problem with this, then. And after all, it's not really my problem. For all I know, the author of the original query is loving all the attention.

I believe it's traditional at this point for the dissenting voice to be told to get lost and stop reading the blog.

And there I really believed I was evil enough to be a minion.

Of course, even in Boring-on-End, there's two Starbucks, and they're right across the street from each other.

We need a village Green which is bordered by the pub, teahouse, town office, library, church, and all that stuff. The phone box can be on the green, next to Amelia's favorite bench. There are also a number of ducks that hang around there; although, strangely, there is no pond...

Buffysquirrel, I am not sure what is troubling you. Amelia Pettipants comes from a Guess the Plot entry, not an opening, and several different minions have used her. It doesn't seem to be anything that is anyone's intellectual property.

For all we know, Miss Pettipants may be Evil Editor's invention, to pad the Guess The Plot entries.

If she really belongs to someone, I'm sure the minion will speak up.

If an anthology is written, accepted authors should receive remuneration. My opinion, anyway...

The original query with Miss Loraine Pettybone is here. Not only is Amelia Pettipants' name different enough to be distinctive, but her character doesn't seem to resemble that of Loraine all that much, at least not as she is currently evolving.

I don't think it's a parody. If you look at the GtP's for the query, you can see that the name clearly had grabbed the minions' imaginations before they knew anything about the author's original character!

Buffy, the original creator of Amelia Pettipants gave the complete use of the character and settings to Evil Editor & the Minions as a Holiday Gift.

Please be assured that even though AP has appeared in more than Guess the Plots and a couple of Continuations (there are a couple of short stories which will probably see the light of day here in the future) the Original Author is delighted that she has become a source of inspiration and fun to the Minions who have given the OA so many hours of reading pleasure.

It should be near the sea, possibly on a narrow penninsula, with impressive sea cliffs topped by paths where mysterious meloncholy characters stroll as they regret the past and ponder the future.

Where is the haunted castle?

I love the huge morgue (which usually don't have big windows, Dave, btw). I love the idea that during WWII or something, Boring-on-End was a large military hospital.

Actually, during WWII, Boring-On-End housed a secred SAS research laboratory in the morgue's sub-basement. We still don't know where all the bodies went...

A December,
look here, about halfway down the page for the Allegheny County Morgue.
www.phlf.org/news/essays/eclectic/ch15/index.html

I used to visit an office across the street from the morgue and yes, it's old and the inner courtyard has high windows to facilate ventilation when there was no air conditioning. The people in the office could see lights through the windows but the blinds and shades hid the coronor or Medical Examiner from view.

Frederick John Osterling designed great old buildings. I imagine one of them sitting in Boring-on-End.