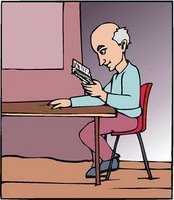 Below are the titles of the fiction nominees for the most recent National Book Award. No doubt you've read all of them, and know which plots are the real ones. Answers at bottom of post.


A. The Echo Maker

1. Lax security at the world's first human cloning facility leads to hordes of clones rampaging through the streets. When it turns out bullets can't stop them, the National Guard faces its toughest battle ever.

2. When caught in the girls' bathroom, Mikey gets sent to the principal. Can Mikey avoid punishment by claiming that he was just doing research on which bathroom has better resonance, or is he doomed to suspension?

3. Frances decides not to climb the mountain known locally as "The Widow Maker," opting instead for the more genially monikered "The Echo Maker." What she doesn't realize is that this mountain's sounds emanate not from its geography, but from the cries of the souls who perished there.

4. After a highway accident, Mark Schluter is left in a coma. When he awakens, he has developed a rare condition in which he believes all his loved ones are actually look-alike actors and robots who sound just like the people they're posing as.

5. Born in the noisome and noisy slums of fifteenth-century Paris, Jacques Rienne was nearly deaf from birth, and needed everything repeated to him. As an adult he becomes one of the pioneers of sound technology, inventing a mechanical repeater that he patents and markets under the name, The Echo Maker. Alas, the machine proves to be of no use to anyone else, and he dies penniless.

6. As erosion and climate change increase the porosity of the walls of Whitworth Gorge, the rangers are left with a difficult problem as the county’s one tourist attraction slowly loses its unique appeal. In desperation, they hire Vasclov Bejkvel to shout back the tourists’ proclamations. The plan backfires, however, when it transpires that Bejkvel speaks limited English, and has Tourette’s.

1. A dizzy blonde wants to be a record star -- until somebody finally tells her LP's went out of style twenty years ago. Hilarity ensues.

2. The Earth rotates on its axis and revolves around the Sun. When evil scientist Eric Maloscuro stops the rotations, half the world goes permanently dark. Can Cindy Timares overcome Maloscuro and stop the plummeting real estate prices in her dark neighborhood, or will she change careers and become a Lady of the Night?

3. On the planet Lorgan a rebellion is brewing to remove the tri-sexual dictator Muffy. Civil disobedience has failed. The legislature disbanded. Now Merton, the mild mannered hero of professional wrestling, must step forward as leader of the rebels for ONLY REVOLUTION can free the Lorgans.

4. Two accounts of the same trip. You have to turn the book over and start from the back to read one of them. Plus, in the margins you get a timeline of history. And the page numbers, when you riff them like a flip book, revolve. An architectural marvel. Also, a novel.

5. The world champion of beef barbecue gets himself elected leader of the national gardening society, a position that he parlays into a political career that ignites the fires of revolution through the heartland.

6. After two weeks circling the planet in the space shuttle, a female astronaut returns to Earth pregnant. In an effort to secure child support, she demands a paternity test--from each of the other six astronauts who were aboard.


C. A Disorder Peculiar to the Country

1. News media from around the world gather as social researcher Watson Troy prepares to reveal the results of his study and name the one country that has the most butt scratchers, nose pickers and writer wannabes per capita.

2. Max Bling wants to spend a quiet weekend away from the busy city. He finds, however, that a sleepy upstate New York village is populated by a group of people with an odd speech impediment . . . and a common history tied to a shallow grave and a woman known only as "Bibibibilanoo."

3. Joyce and Marshall have been fighting a bitter divorce battle in the courts. When Joyce watches the World Trade Center crumble, she feels a great gladness, because Marshall works on the 86th floor. One can only imagine her pain when she finds he has survived to fight another day.

4. Brick Hoffersman is a successful cosmetic orthodontist living in LA, yet he finds his life lacks fulfillment. Then, one day, he receives a courier package containing an attorney’s letter. His great uncle has died, leaving him a country estate. Nothing, however, can prepare Brick for the horrors and challenges he faces in his new life in Britain as he applies his skills to the salvation of an entire nation, and a love that he can’t bring himself to kiss.

5. Bill and Marie have been eating more and exercising less for years, until they now weigh twice what they did in college. As they travel the country, they discover they aren't the only ones.

6. When McDonalds sues Russ Wilkins for eating at Burger King, he decides litigiousness has gone way too far, and sets out to blow up as many McDonalds restaurants as he can.

1. Mark thought he was instructing his secretary to "edit the document." But his faulty experimental speech recognition software has her chewing it up with her cottage cheese and grapefruit for lunch. Hilarity ensues until the two fall in love--she with his quirky instructions, and he with her zany behavior.

2. Deep in the heart of the White House, executive chef Marco Balsamico comes up with a plan to both protect the President’s name and also introduce more fiber into his diet: by using official documents as an ingredient. Success is short-lived, however. It soon becomes clear the President can barely stomach the truth and, despite the extra roughage, he is still full of shit.

3. The true story of a sentient laser printer that feeds on hapless authors' manuscripts. When promising author Joe Hill discovers the truth, he is eaten.

4. Follow the lives of Mary and Bobby, Vietnam War activists in the 70s, now scornful of wussy 90s activists who plot to dub messages onto Blockbuster tapes or to put fake barcodes on products in chain grocery stores. Hell, next they'll probably steal the Constitution and eat it.

5. Priscilla held the love letter from Jeffy in her hand. "What if my mom finds it?" she said. "What will we do, Jeffy?" Jeffy looked up, warming his hands in front of the fireplace. "Priscilla, I know exactly how we can keep your mother from finding that." She looked at him with interest. Standing up, Jeffy threw his cup of coffee on the fire and it sizzled and went up in smoke. "Eat the Document."

6. When yet another creditor knocks on his door, and asks Sam to sign a piece of paper, Sam forces the guy at gunpoint to eat the document. When Sam ends up in jail, his family ends up on the street.

1. Admiral Dewey plows through stormy seas in his schooner Decimal in search of the dreaded Roman. Will he find him without a placeholder? Or will the wily warrior find Corporal Zip.

2. It's 1941 meets Connecticut Yankee meets Ran as a Japanese fighter plane from World War II slips through a time warp and lands amid a Samurai war in fourth century Japan.

3. A heartwarming coming-of-age tale in which a Mayan boy struggling with his lessons starts a mathematics revolution. Also, a feathered serpent.

4. When the boss stiffed me on the pay, I just added another zero. Little did I know that this was the beginning of a new career.

5. He was a handsome Confederate general, she a daring Northern spy. He held her in his arms and whispered, “Nothing can divide us.” Turns out that wasn’t true.

6. It's a week after 9/11, and everyone's out to make a buck, from firemen, who shill for First Responder cereal, to cop Brian Remy, who gives guided tours of Ground Zero to celebrities.

And hey, I got in one fake plot for every title! Must have been a day of inspiration. (Dave, I'll take credit for the Ran reference.) Can I count that as a pub credit?

No pretending here - I haven't read all 5. I've perused the first one at the bookstore. I like the
premise of the book- haven't read it yet- but it's on my long waiting list - when I have some time - probably summer.

I wanted B to be #4 - amazed to find out that it was. This sounds like something I'd enjoy.

C-D-E, no idea at all. Loved the choices that could have been E

You are effing kidding me. And that completely ridiculous coma-robot-pod person book won?

No wonder my agent pulls out her hair every day.

Anyway, the fake ones were fabulous. Thanks for the entertaining read!