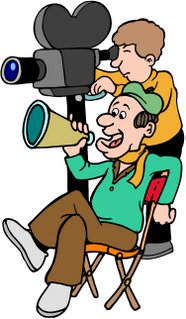 I never watch the Oscars anymore, because I have a mild aversion to watching an endless parade of pampered billionaires saying thank you to every distant family relation and every person remotely connected with their film, or their career or the film industry itself, when what they'd really like to be saying is, "I've scratched and clawed my way to the top despite dozens of backstabbing attempts to drag me down, especially by the four no-talent buffoons I beat out for this award, and if the whole Academy rots in hell for eternity for not recognizing my God-given talent sooner, it'll be too good for them."

Just because I don't watch the Oscars doesn't mean I can't do a piece about them, but the problem is, I don't go to the movies much anymore, because the screens have gotten so small you can barely see them. Once I came in late to a movie, and figured it must be in 3-D, because everyone was watching through strange glasses. Then I realized the truth: they were all using binoculars.

Anyway, instead of writing about this year's nominees, none of which I've seen, I decided to choose an earlier year. Turned out I had to go back to 1985 to find a year for which I've seen every movie that got nominated. So here we go.

2. Witness. They take what's basically a documentary about the Amish, easily the most boring people on the planet, throw in a murder, and suddenly it's a best-picture nominee? Get serious.

3. Out of Africa. Turned out most of the movie takes place in Africa. Man was I pissed.

4. The Color Purple. Little-known fact: The detainees at Guantanamo are forced to watch The Color Purple over and over until they talk. So far no one's lasted to the second showing.

5. Kiss of the Spider Woman. I gotta tell you, special effects have come a long way. This has to be the lamest superhero movie of all time.

That's got to be the worst five movies ever to make up one set of nominees. What truly boggles the mind is that it was the same year such memorable films as The Return Of The Living Dead, Real Genius, Mad Max Beyond Thunderdome, The Toxic Avenger, and Fletch came out. Go figure.

As I suspect most of you have no idea what this year's nominees are about, I'm going to prepare a Guess the Plot for each of them. It's up to you guys to provide the fake plots. I'll Google the titles and find out the actual plots, and Monday we'll have a test to see how many you can get right. Here are the titles:

time for a link, methinks.

Thanks for the humor.

I haven't seen any of the movies nominated for an academy award this year. Now I know that I am, at least, in good company.

I did hear about The Queen. (I was heading to the ladies' room at the local movie theatre after watching Stomp the Yard and one talkative woman cornered me and insisted on telling me how wonderful The Queen was, detail by detail, convincing me not to see it--and probably causing irreversible damage to my bladder.)

Faint murmurs about Letters from Iwo Jima percolated through the air to me, too.


I guess next time someone tries to say you're a woman pretending to be a man, we know they're lying. (Even if we didn't know already.)

I guess next time someone tries to say you're a woman pretending to be a man, we know they're lying.

Huh. People say Snark is a man pretending to be a woman. Maybe they're both just New Yorkers.

This GTP thing is too hard.
Tonight, as I struggle to create witty, literate and inventive GTPs, the TV show Ugly Betty has a subplot where the "mysterious villian" (the sex-changed, hotter than hot lady in red, scarlet red, cut to reveal everything the perfect girl wants to reveal) turns out to be the (declared dead) BROTHER of the playboy gigolo womanizing magazine editor. A newly created woman thanks to SRS. And the magazine editors hot, hunky stud of a best friend is going to make with the mysterious lady in scarlet.

december, I'm a woman and I HATED The Color Purple.

Of this year's Oscar nominations, I haven't seen any that I know of. But I want to see Pan's Labyrinth. It isn't showing in Maine, apparently, or at least not within 150 miles of my house.

little miss sunshine was excellent. i didn't see the others.

I have opinions on what's better between "Flushed Away" and "Happy Feet". I also could tell you a thing or two about Land Before Time 10, 11, and 12. Anyone want to guess which family member sets the movie agenda here?

Um, not that I have children or anything. I'm actually a completely unattached bachelor who is completely and totally free for anything and everything. My wife frequently says so, particularly in the morning when she's dressing our son and I'm still lying in bed. Not that I have a son. Or a wife.

Did you know that I'm also an astronaut? A pirate astronaut billionaire, in fact. Yep.