Would you want this book? 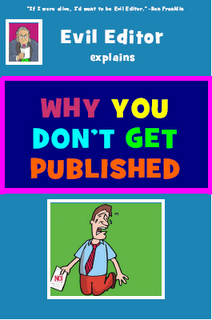 Having purchased 10 ISBN numbers in order to start Evil Editor Publications and put out one book, it seems silly not to put out a couple more, thereby reducing the ISBN expense attributed to Book 1, and bringing it closer to breaking even. I feel certain there'll eventually be Novel Deviations 2, but it will be many months before there's enough material for that. In the interim, I've compiled material for a book that consists of 65 of the Q and A's from back when people used to submit q's and I used to a. I've divided these into four chapters: Query Letters, Agents, Manuscripts, and Misc. Between the chapters are sections with rants, dialogue, etc. from the Face-Lifts. And on pages that don't get filled up by the q & a, additional comments taken from Face-Lifts. It's somewhat longer than Novel Deviations, but still a thin book. In my opinion it's hilarious, and occasionally useful.

Now it's a matter of whether there's any demand for this. Obviously it's less expensive to read the blog from start to finish. But I like the idea of having a book; it's a more convenient way to read, and can be given as a gift. Plus, two years from now something better than blogging may come along and blog sites suddenly aren't profitable and go out of business and everything is lost (unlikely, perhaps, but I don't see any journal manufacturing companies in the Fortune 500 lately).

That cover is just an illustration, there is no cover so far. Though I kind of like it for a rough draft.

No binding commitments, but if the book existed, would you want one?
Posted by Evil Editor at 10:40 AM

If enough of us buy it, will you pose for the cover? In Unknown Comic costume, perhaps?

I would want one if for no other reason than to ensure I end up with the complete EE collection lined up on my bookshelf. -JTC

Good idea. I think you should stick with your portrait on the cover for the entire series though...

That has to be the best blurb since, well, the death of Ben Franklin really.

I think I could go for this book. It's a good idea.

I'll buy it. What happened to the Q&A segment anyway?

Great idea. The early portions of this blog (the Q&As) were very, very helpful to me. There's a lot of confusing stuff out there already about how to write a query, but your info., with all its silliness, went right to the heart of the matter for me. Not only would I be interested, but I also think it might SELL. And it's a great title.
mb

The minions are so entertained (and educated) they stopped asking questions. -JTC

I'd probably get one to have, but not to gift. And I really like the proto-cover. :)

"If enough of us buy it, will you pose for the cover? In Unknown Comic costume, perhaps?"

Heck yes, I'd buy it and give it to my crit partners for Christmas.

Yeah, I'd buy it and I love the cover the way it is!

Love the cover, love the blurb, love the idea. You got my vote!!

I like the idea, but I think it would really need a fair amount of additional material included to be worth purchase. I wouldn't want to buy--or even be given--something that consisted entirely of stuff that could be read for free on the internet, even if it might not be accessible all the time.

I would buy it, but I'd really like it if it's liberally dosed with your humorous commentaries.

Sure, I'd buy it. It's a good way to keep what's here. Blogs will go out of fashion after a few years and something else will arrive. After all, blogs replaced those sillt personal web pages (here's my wife, here's my car, here's my dog, here's my kids, etc...)

I'll buy one. It would be fun to end up with a complete set of EE books!

Probably not, but only because postage to NZ is prohibitive.

I like the idea of the book and in some ways a slim manual appeals more than the big books I have on getting published (and don't tend to read).

Have you considered offering it as an e-book which would be a more economical option for you and save having stock lining the walls of your office, garage and dining room? With the right marketing ebooks can take off. Especially if you offered something else for free that isn't available online. e.g. 101 tips for x, y, z.

If you really wanted to get serious about marketing it you could get some of your minions to offer freebies to accompany the paid purchase of the book/or ebook. My ebooks probably aren't relevant but as an example I have a really simple little thing, 101 Hot Money Tips. Later I'll be adding a free audio download on money personalities. While they are not relevant to your book my point is that by adding these free downloads you could easily market the ebook.

It would be a win-win for your minions. Their free ebook/audio download would be advertised on your site and may garner traffic for their paying services.

You could also consider advertising or promoting the book in the Absolute Write newsletter although your readership here is probably big enough to sustain it if you have the time and energy to do the marketing.

I'd first want to know what would set it apart from the plethora of other books offering a road map to publishing success, or pointing out the roadblocks along the way.

The blog is great because it's ever an ever changing source of entertainment mingled with the insights. I'm not sure a book would be an improvement.

Whaddaya mean "no binding commitment"? If it's not bound, I don't want it! What good is a book without a binding? Sheesh!