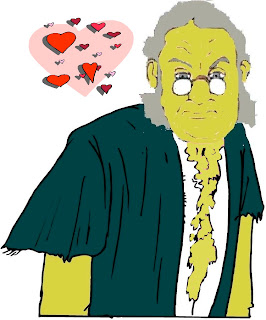 2. After the zombie apocalypse kills us all, Marley discovers that brains taste sweeter when he's shambling alongside Dixie Adams. But then the vampires show up and ruin everything.

3. Soon after Jack starts working in Lisa's pizza parlor, romance blossoms. Should he tell her he's a zombie now, or let her find out the hard way, when customers complain that fingers weren't among the toppings they ordered?

4. Melissa has grown tired of dating men who are interested only in her body. Eventually she meets George, a man who actually wants her for her braaaaaaaaaiiins.

5. John's beloved zombie bride Marsha has been kidnapped. Can he lead his fellow rotting corpses through the city and rescue her before she ends up as fertilizer?

6. Marla Higginson falls asleep watching TV only to awaken in a Zombiefied version of her favorite soap. Will she escape Zombism or, since her lover Brendan is now undead, will she convert for him? Tune in tomorrow when…

“I am seeking representation for my humorous paranormal romance novel, Zombies in Love, complete at 68,000 words long.

When he was alive, Jack Kershaw's laziness and untrustworthiness nearly destroyed the family business. Now that he's a zombie, Jack has two simple goals: to hold on to his new job at Lisa Alioto's pizza parlor, and to keep his murderous cousin from realizing that he's not entirely deceased. But that's before he realizes that Lisa's delicious body may be even less attractive than her generosity and integrity, [What I think you're trying to say is: But that's before he realizes that Lisa's generosity and integrity are even more attractive than her delicious body. Trust me, no woman wants her body described as "even less attractive than" . . . anything.] and he begins to wonder-- has he found the love of his life after he's already dead?

But Jack and Lisa are in serious danger. Jack's second chance at life is the inadvertent result of a lab experiment by two graduate students, and Winthrop University-- a school with plenty of sinister secrets-- will do anything to conceal that someone on its campus raised the dead. [Winthrop University is your villain? What happened to Jack's murderous cousin? Why was he even brought up if he's not the villain?] [Are you sure Winthrop is on board with you claiming they have sinister secrets? You can always make up a college name.] After Jack inadvertently infects Lisa, she is equally at risk. [Technically, don't you have to be dead before you can be a zombie?] The two of them must find strengths they never knew they had if they want to gain happiness together. [A vague and blah last sentence. What, specifically, do they have to do?]

The academic sections of this novel are partly based on my experiences earning a PhD in the History of American Civilization at Harvard University [but I used Winthrop instead of Harvard because Winthrop doesn't have a secret slush fund for having slandering alumni murdered]. As an independent historian, I have published academic essays on the American middle class [, which certainly qualifies me to write about zombies,] and on merchants in Charleston during the Revolutionary Era. I have also edited and co-written _________________. Under my fiction-writing pen name, ______________, I have published several short stories such as "_____________, and the novella_____________, available as an e-book from Drollerie Press. “

Not sure why the entire body of the letter is enclosed in quotation marks.

If someone told me they'd inadvertently made me a zombie, I probably wouldn't believe them. Until I started craving brain pizza. In any case, I don't think I'd take it well.

When you say the "academic sections" of the novel are based on Harvard, do you mean the sections in which grad students create a zombie? Or is it the part where the students come into the pizza parlor, get drunk, destroy the place, kill someone for laughs, and get off with a slap on the wrist because their parents know a Kennedy?

When you open by saying Jack nearly destroyed the family business when he was alive, I expect him to save the business as a zombie. Just like I expect more about the murderous cousin. As neither gets mentioned again, let's leave them out and open something like:

Jack Kershaw has two simple goals: to hold on to his new job at Lisa Alioto's pizza parlor, and to keep Lisa from finding out that he's a zombie.

Lisa is bored with her life, but when handsome, charming Jack comes along, she remembers the wild young girl she used to be, how she's long dreamed of having a romantic adventure . . . though admittedly with someone who was alive.


Now you have more space to give us some detail about the serious danger they're in and what they plan to do about it.
Posted by Evil Editor at 8:44 AM

This is the query author-- thank you very much! (And thanks for the fine illustration!) May I use your exact phrasings for the sentences about Jack and Lisa-- they are so much better than the way I had them.

Love the joke about the slush fund-- if this never gets published, you'll know why!

They're all yours. Feel free to use or improve them.

"Now that he's a zombie, Jack has two simple goals: to hold on to his new job at Lisa Alioto's pizza parlor, and to keep his murderous cousin from realizing that he's not entirely deceased. But that's before he realizes that Lisa's delicious body . . . "

Nothing to add except that #4 made me laugh out loud.

Why does he have to go work at a pizza parlor?

You had my interest in the first paragraph and you lost me when you switched over to Lisa (which is when your query starts veering off into different directions...). I would stick with Jack and talk about Lisa from his point of view because I was immediately sympathetic to his situation.

Either way take EE's advice and sharpen up the writing. You might want to take a look at your manuscript and see where there are similar awkward sentences. An agent is probably going to assume your query letter looks a lot like your book.

Also the stuff about academics confused me. Are you trying to imply there are literary aspects to your zombie romance novel?

Last, is he a zombie in the traditional sense? Because if he can "infect" people but he's still good looking, charming (I'm assuming he can say more than "Braaaaains"), and fully ambulatory, we're all going "What kind of undead creature IS he?"

I think it sounds like a clever and funny plot though! Good luck!

EE's comments fixed and this is a winner. I would be careful using a real university as the villian. I mean, it's not like they're the Vatican!

I'm not sure what to do with this query; the idea of the undead serving pizza is still shaking my preconceived notions of zombiehood. So here's my go at your info paragraphs:

My humorous paranormal romance, Zombies in Love, is complete at 68,000 words. [You could put this at the bottom with the other stuff.]

Like enewmeyer on the first read through I also thought that Lisa was the cousin and the pizza parlor was the family business. I had to go back and read again because it totally confused me.

This sounds like something I would pick up in the store and maybe browse the first few pages. I'm a sucker for paranormal humor.

I do think that you need to invest the query with some of the irreverence of the genre. The book sounds like it's supposed to be funny but there's no humor in the pitch.

Also, what kind of zombies are we talking about here? I imagine a rotting revenant dropping body parts into the pizza wouldn't go over well at the local college hangout.

Personally I think it would be hilarious if , a la Death Becomes Her, the protagonist gets in all sorts of hijinks trying to cover up the fact that he's a rotting corpse working the "graveyard" shift at the friendly neighborhood pizza parlor.

Pizza parlor with checkered past.

Something y'all might consider. About 15/20 years ago, about 1 mile from where I worked was a Catholic Church and Grade School. On one side was the playground and beyond that a large discount appliance store. On the other side (about 50 feet down the road) was run down brick building about the size of a large garage (12 by 20 or so) and someone shoved pizza ovens and a sales counter about the size of two phone booths. Apparently, they served great pizza because they did banner business. Lots of deliveries, lots of takeouts. They even sold by the slice if you could find a way to fit inside the door. It had no tables or chairs and was claustrophobic's delight. Well, then the Allegheny County police figured out why -- they were selling drugs with the pizza. It was speculated that "All the works" had nose candy and "extra cheese and sausage" meant heroin.

This "endeavor" so outraged the State Legislature that they passed laws increasing the penalties for selling drugs near schools. Rightly so.

A zombie in a pizza place -- tame.

Is this a twilight spoof? I always thought they would do it with mummies but zombies is just as good.

No, there are plenty of stories beyond mine. I was being nostalgic, remembering stuff and all that.

The unsaid advice is that if selling drugs out of a pizza joint 100 feet from a Church and grade school is has happened, perhaps zombies in their current exposure and raising the dead, are a touch ordinary too. The story sounds good and might be a great read but the query doesn't sound special.

What is is about these characters or their predicament that make them special?

If it's meant to be a comedy, I think it's a funny premise with evident opportunity for humor.

If it's meant to be a paranormal thriller/romance, paranormals are vogue (although I'm not sure teenaged girls are particularly moved by zombies). I think the zombie element is meant to elevate the story from being a typical "Man on the run fakes death and goes into hiding but ends up getting new people he cares about in trouble so must go back and confront his past" story. Sort of like how vampires elevate Twilight from being a boring story about a whiny teenaged girl who has the same repetitive conversations with her boring boyfriend to a story about...

Technically, don't you have to be dead before you can be a zombie?

Technically, no. In the Voodoo religion/cult, wherein, I think, zombies originated, the soul can be removed from a living person turning them into a zombie.

Marley, Melissa, Marsha, Marla... I wonder why so many GTP submitters all hit on names beginning with M.

Thanks everyone for your help-- and Joe G, thanks especially for describing the trope so succinctly. That's exactly what I'm trying to do, and I'm glad that came through.