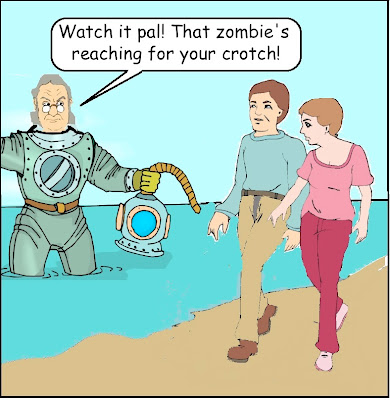 Your caption on the next cartoon! Link in sidebar.
Posted by Evil Editor at 7:17 AM


Don't be alarmed. I was just giving the toilet a very thorough cleaning. Could one of you lend me bus fare to get home?--R. Watson

I found your manuscript in a bottle. Since there was no SASE, I'm here to reject you in person. --Rick Daley

Whenever I visit Londonderry, I spend a day by the River Muff.. --anon.

Man, that was a night out I will NEVER forget! --anon.

No. It's not the creepy janitor this time! --Ames Plaza

No, I am not the fifth Teletubbie. --anon.

Would it not be a Zombie Squirrel if it's going for the nuts?

There's a new Hell's Kitchen starting tonight. They must have fixed their bleeper.

A new Hell's Kitchen? Hmmmm. Not sure I can like another one after Paula, who definitely shoulda won the last one, was beaten by a 23 year old who favored 'bass on big platters' hung on walls as his decorating motif.

I might have to buy a new TV. There are only so many bleeps a TV has built in it before it dies, you know.