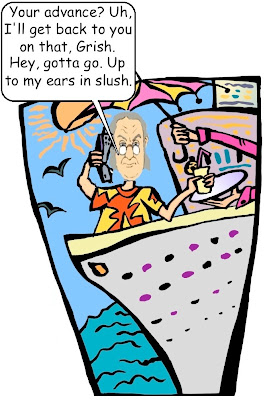 Your caption on the next cartoon! Link in sidebar.
Posted by Evil Editor at 7:14 AM

Tomorrow's Stage 4 of the Tour De France has the possibility of being wildly exciting. If bicycle races can ever be wildly exciting.). The course is hilly with lots of twists and turns.

It's a team time trial where each team rides the same course alone and races the clock. The Teams start seven minutes apart and race the clock. The winning time is the time of the fifth rider of the nine on a team. Sorry that sounds so technical.

This Stage is a speed race with teams of nine riders going up and down hills and around corners between 30 and 40 miles per hour.

Think of this as exciting counter-programming to Judge shows, politics, and Michael Jackson's Funeral.