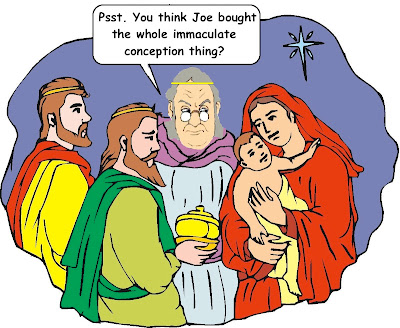 Your caption on the next cartoon! Link in sidebar.
Posted by Evil Editor at 6:58 AM

I think he did, I think Mary did, and I know I do.

If that baby had sideburns it would have been a fight scene.

Ha! Thanks for making this very ex-Cath laugh.


Listen, sister, I'm the wise guy. The other two are just stooges.--wo

Ooh, EE. Such a cynic. Although I tend to think Mary & Joseph cooked up that story after he got her pregnant before they married.

The obvious reason being that you don't think He will know who made the comment?