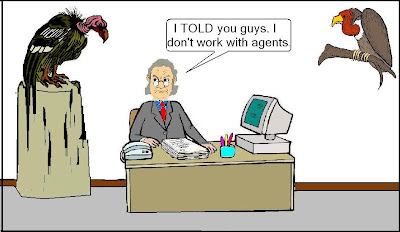 Your caption on the next cartoon! Link in sidebar.
Posted by Evil Editor at 6:53 AM

They're creepy. They have tiny brains, they have feathers and little beady eyes. And beaks. Yeah. The beaks are my least favorite part of them...

So, while I may seem to be preying on a certain blue-jacketed someone around here, I'm not perched high up on a stand, preparing a pounce session.


And the minions thought I was tough on queries? These birds can smell a proposal that's DOA. --Kings_falcon

First a nest, and now eggs. I haven't shredded in weeks.--WO

Of course! (slaps forehead)What else would you call two vultures in an editor's office? Good one anon. (Does that mean it's ril's?)

That reminds me of one of my family's summer cookouts. Lots of dead meat laying around doing nothing.

Dave, I thought that was your first wife...