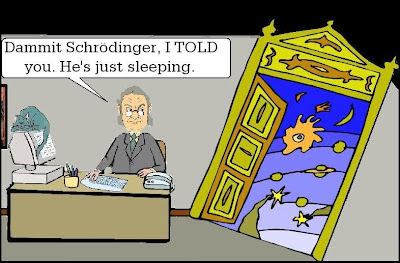 Your caption on the next cartoon! Link in sidebar.
Posted by Evil Editor at 7:31 AM


I hope this alternate universe can hold more than a week's worth of rejected manuscripts.-- r. watson

Oh, brother. Glitter, donuts, now a bloody Tardis. I hate it when the minions send gimmicks with their submissions. They should send cash... --the spitzer

Nyarlothep needs to learn how to handle criticism or it'll never get its memoirs published. --kaolin fire

All right, dammit. I've just Wikipedia'd again, so I could get it.

And yes, because of you, there's a new verb in my universe.It's a bookend kind of a verb, sitting opposite the other used-to-be-a-noun verb: Google.

And now I know about Schrodinger's cat.

Dammit, EE and ril. You're killing me with all of this education.

So I've got one for you. See if you can tell me what this is without having Googling or Wikipedia-ing or otherwise looking it up. This weekend, my brother and husband played a sport in my brother's backyard.

Cornholing. What is it?

Cornholing. What is it?

Buggered if I know...

People have been drummed off of this blog for less than explaining cornholing.

It's a real sport, played mainly in the South.

Any ideas (that aren't tacky or banning-worthy), you two?

P.S. There really is an American Cornhole Association.

Double P.S. I learned on my Wikipedia odyssey not only about the S guy's cat, but also that the S guy had a thing for some chick that was the wife of one of his colleagues and they had a daughter together and he didn't go to Princeton but stayed in Oxford instead in the '30s so he could have them both help raise his daughter.

It sounds like a soap opera, or a trailer park kinda thing. Made me wanna check the guy's genealogy out - in case he had distant relatives in Kentucky by any chance.

So thanks for all that edification, fellas! You're so good to me. Really.

Probably I should work now. Maybe.

Cornholing? They didn't play it in Louisiana. At least not in public.

I seem to recall an article in Sports Illustrated that described cornholing. It said You hold a beer in one hand and your bag in the other. I didn't want to know any more after that.

The "thought experiment" known as Schrodinger's Cat is hard-core, Quantum Mechanics. It's not for the "faint of heart" but it is at the heart of Quantum theory.

As for "the game of cornhole" - - I wouldn't touch that with a ten foot Pole, a twelve foot Turk or a midget Italian.

You hold a beer in one hand and your bag in the other.

Isn't that what you red-blooded American men have always desired?
Well, at least during the warm up, before the toss?

Love the fractal results. Thanks, tal!

It has been called many things, Corn Toss, Bean Bag, Bean Toss, Soft Horseshoes, Indiana Horseshoes, but to many of us born and raised in Kentucky and the southern part of Ohio, the game is passionately referred to as Cornhole.

It has been said that the game originated in Germany in the 14th century, and then was rediscovered in the hills of Kentucky over 100 years ago.

The truth is, who really knows, but the game is great fun for all ages and can be played anywhere!

Cornhole or Corn Toss is similar to horseshoes except you use wooden boxes called cornhole platforms and corn bags instead of horseshoes and metal stakes. Contestants take turns pitching their corn bags at the cornhole platform until a contestant reaches the score of 21 points. A corn bag in the hole scores 3 points, while one on the platform scores 1 point.

Scoring can be swift and the lead may change hands several times in a match before the winner is decided.

The game is generally played tournament style with an individual or team being named the champion at the end of the tournament.

So now you know.

I think this is my favorite caption, because, like that door, it is nicely skewed. Besides, I feel smart because I got it.

Please be careful with how you refer to that game.
There is a nasty slang meaning to "cornhole" that I won't explain. Just suffice to say it is very rude.