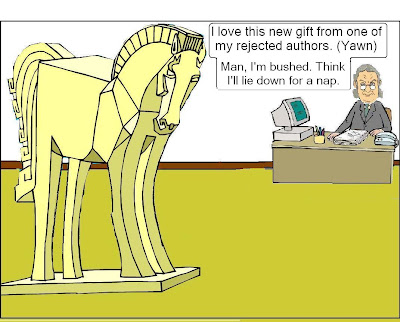 Your caption on the next cartoon! Link in sidebar.
Posted by Evil Editor at 6:30 AM


I knew I shouldn't order Trojans and whores by phone... --anon.

They won't think they're so clever when the stallion gets back... --anon.


Wow . . . that's quite the advertising gimmick their giving away with a package of condoms now. --freddie

You're not gonna credit yourself on this, EE? You came up with half the caption.

I think robin's popping out as soon as EE's back is turned.

Not that Robin's ms would ever be rejected of course.

I think you're onto something there, paca.

Actually, it contains a pack of carnivorous moles, armed to the vibrissae....