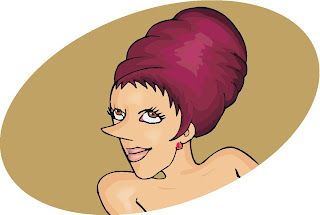 I seem to recall reading that if you put a penny in your piggy bank yesterday and two pennies today, and four tomorrow, and then eight, and kept doubling the number, at the end of three weeks you'd be a millionaire.

That's the way I was told it would work with Twitter. The twits would multiply exponentially, and after three weeks I'd have more twits than Evil Editor has minions. Then he'd have to give me a raise.

Well, after day one I had 8 twits, and after day two I had 17. That's much better than the three cents I'd have had after two days of banking pennies. But most of my twits are also minions, so to outpace EE I started following the International Association of Administrative Professionals, which has 1158 followers. I tweeted to them about my new blog. Hopefully all of them will start following me.
Posted by Evil Editor at 6:51 AM

Mrs. V., are you naked under there? Cause I'd be much more likely to twit if there were naughty hijinks ensuing.

We're all naked under there, honey.

That sounds chillingly like something from Steven King's "It". You haven't been dating any guys will big red noses and really sharp teeth, have you?

Soon as I get nice new shiny bandwidth...tomorrow!

Mrs V, do you have a first name? After so many cartoons, I feel we should be on a first-name basis.

Talk about silly software. I though that the NT Review of Books was about books and foolishly followed it. IT wasn't and I quickly unfollowed it.