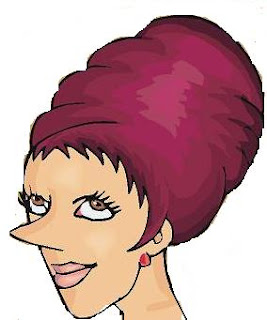 Hi, I'm Mrs. Varmighan. You can call me Mrs. V. It's easier to spell. You may know me as the woman behind the man, the man being the highly disagreeable teddy bear who happens to be the world's most famous editor.

I've tried to get him to join Twitter so his minions could get to know him better, but he refused to join unless his handle could be evileditor or EE, and they were both taken, probably by someone who thinks EE would be willing to pay them big bucks to relinquish the name.

As it happens, MrsVarmighan wasn't taken. MrsV was, so if you want to follow me, you're gonna have to spell "Varmighan" right at least once.

If you're already a twit, you probably know how to follow me using @MrsVarmighan. If you aren't a twit and you don't want to be, I'm going to arrange for all my tweets to appear on Evil Editor's blog as soon as someone tells me how.

Here's the good part. His Evilness would never stand for me tweeting on the clock, so I invite all minions to submit potential tweets to EE's email address (evledtr@gmail.com), and I'll pick out the funniest ones to post. All his email goes through me first, and he rarely reads his blog, so he won't know what's going on till it's too late.

BTW, EE would puke on his keyboard if he saw abbreviations like h8 or l8r or Go 4th & X. So pretend you're writing to him, or I'll get in big trouble.
Posted by Evil Editor at 9:04 AM

BTW, EE would puke on his keyboard if he saw abbreviations like h8 or l8r or Go 4th & X.

Is "BTW" acceptable then? Or just acceptable for Mrs. V to use in a post?

*Sigh* It's mixed messages like this that drive queriers-2-B nutso. ;/

Mrs. V doesn't know how to do much of anything at the moment, but shall endeavor to follow her followers, at least until such point as this begins to turn her into a bigger curmudgeon than her boss.

I don't tweet. Can I join in or participate some way?

Try clicking on the link above Mrs. V's picture in the sidebar. Possibly you'll be able to see Mrs V's tweets. I'm not sure what other participation there'll be. I'm not even sure if not Twits will be able to see it.

I don't have a twitter account and the box on the left side of your blog displays the texts of the tweets but not the media you've attached. To see the media, you need an account at Twitter.

I don't get this tweeting thing. Or is it a twitting thing?

It's all very bizarre to me. But, following Mrs. V is the first twitter-twittee thing I read where the reply was - maybe this could be fun and I could learn.

But it was a very flitting thought, much like a tweet, I think. So probably not worth mentioning at all.

Okay, as I understand it, you can open a Twitter account and use it to do absolutely nothing except read Mrs. Varmighan's tweets. To do so, go to Twitter.com and sign up. You need to give them a name (not necessarily yours) and an email address.

Once you're in, you might decide to also follow your favorite authors or your friends or Lady Gaga. Or you might stay true to Mrs. V.

If the whole Twitter feature fizzles out, maybe Mrs. V will dump it and start her own blog.

I'm just gonna say this: John Locke reached out to follow me a few minutes ago without me following him first. Coincidence that Mrs. V also starts tweeting today? Or does John use some sort of followbot?

I not only followed Mrs. V, I followed everyone following her, assuming they're minions. I love Twitter.