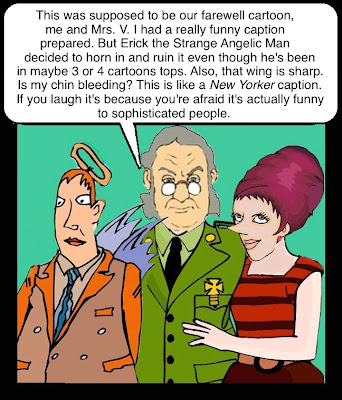 1000 is enough of anything. But the main reason I'm stopping the cartoon caption contest is because I'm out of ideas. Evil Editor has encountered so many occupations, animals, situations, etc. that it's hard not to repeat ideas.

When I started the cartoons I had no idea if they would last any longer than several other features that fizzled out after a few months or weeks. And they wouldn't have if they hadn't been so funny.

To celebrate the occasion, I've prepared a short film that collects the cartoons featuring my most famous client, John Grisham, as well as the always-popular religion cartoons. The credits at the end of the film honor as many caption writers as I could come up with, not just the ones who wrote the captions for the Grisham and religion cartoons. These are the people without whom the cartoon feature would have died out long ago.

The cartoon music is by Kevin MacLeod. The credits music is from Apple. The film is at YouTube, because it's bigger and clearer there. Here's the link.
Posted by Evil Editor at 8:15 AM

This makes me wonder if Grisham knows about these captions. : )

These were fun. I'm at a loss as to what we can do next, though. *thinks seriously*

A great retrospective. Thanks for offering an excuse to goof off and an outlet for inappropriate humor.

Maybe it's time for The Secret Office Diary of Mrs Varmighan...

This was a fun feature. Sorry to see it go, but I understand.

Hey! You forgot to credit Anon in your clip!