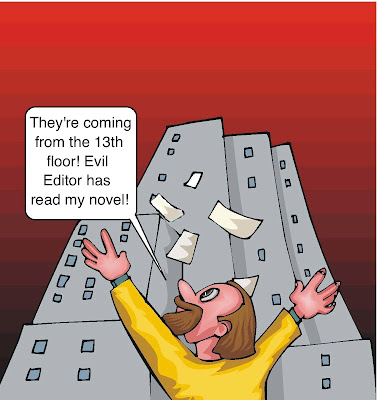 Your caption on the next cartoon! Link in sidebar.
Posted by Evil Editor at 7:03 AM

There's another two hour curse and swearing festival with Gordon Ramsey on tonight.

I think that the main qualification for this season on Hell's Kitchen was the ability to get bleeped out. Men and women both throw F-bombs, butt-bombs, Bitch-bombs, and at least one is psychically paranoid while a second took the vapors and nearly died and a few are just plain incompetent in the kitchen.


It's raining rejections. Evil Editor is back in town! --arhooley

If you were either excited or dismayed at the news that Justin Bieber is publishing a memoir, just wait and see how you feel when you digest the news that Nicole “Snooki” Polizzi of MTV’s Jersey Shore will publish a novel in January 2011 with Simon & Schuster’s Gallery Press imprint.

The novel, tentatively titled A Shore Thing–ugh? double-ugh? double-ugh full on, all the way?–will trace the plight of “a girl looking for love on the boardwalk (one full of big hair, dark tans, and fights galore),” according to a press release.

It’s worth noting, too, that Polizzi told Cathy Horyn in the New York Times that she had only read two books in her life, Twilight and Dear John.

As to the quality of Polizzi’s novel, one can’t be certain, but one thing’s for shore–it’ll sell a lot of copies.