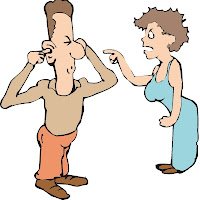 EE, here's a news article you might find interesting. In short, research shows people are more amenable to ideas spoken into their right ear: http://www.telegraph.co.uk/scienceandtechnology/science/sciencenews/5612036/Want-to-get-something-done--talk-to-people-in-their-right-ear.html I extrapolate that to making agent pitches: If you're at a writers' conference and have a chance to pitch your story idea, pitch it into the agent's right ear. And if you're stuck on the agent's left side, just point off in a direction to her left and say, "Hey, it's Stephen King and he's looking for a new agent." When she turns her right ear to you, give her your pitch.

Time to put down the National Enquirer, get out of the shopping lane and get back to editing PS, Mr. H. Inquiring minds want to read.

We only like you because the entries are posted on the right side of the blog.

I've decided to change it to a serial killer steampunk alt-history romance, so it may be awhile.

Forgive me for leaping atop my high horse here, but this is sooo anti-zombie.

Shame on the Telegraph.

Surely all that the research shows is that this effect applies to smokers? They're not going to bum many fags from a non-smoker, now are they?

I bum my fags wherever I can get them.