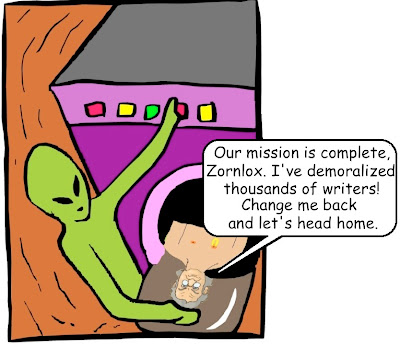 Your caption on the next cartoon! Link in sidebar.
Posted by Evil Editor at 7:02 AM

Normally I just run my clothing through the laundry. --faceless minion

Whoa! Hold on! Don't you know never to put metal in the microwave? --anon.

Gotta be an easier way to disinfect this nipple ring.--Mother (Re)produces

Hey, what the-! Where's my bottom half? And to think I was mad when the machine ate my 'too sexy for my socks' socks.--Mother (Re)produces

I’ve told ya and told ya - no matter how many times you put me through the ringer, I’ll come out on the other side with just the one thing dangling. --Robin S.

The alien says: Don't worry: A little fluff, a little fold, you'll be good as new...except for those staple marks in the middle
And EE thinks: That's not how I wanted to be worshipped.--writtenwyrdd

"Whattaya mean I won't feel a thing? What kind of an alien probe are you running, anyway?" --Paul Penna

Colonic irrigation and a nipple ring buff all for under ten bucks.--WO