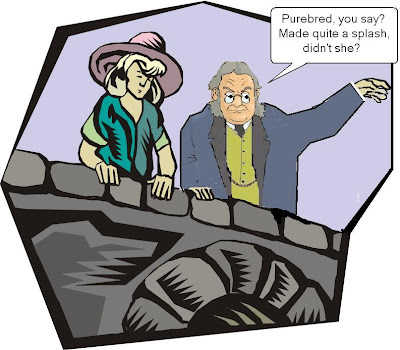 Your caption on the next cartoon! Link in sidebar.
Posted by Evil Editor at 7:34 AM


...and over by the waste treatment plant is where I throw the really bad ones... --Rachel

That's so funny and so nasty. You mean, cruel man! You deserve to be nipped to death by yapping Yorkies.

If that was one of my cats, I hope it was the one that just threw up on the bed.

Am I missing something? I don't get this one.

EE and an author were standing on a bridge when the author's pet started annoying EE. So he took matters into his own hands.

Hey danceluvr, I had the same reaction you did when I first saw this. See, my mind doesn't even go there. I thought they were in fashionable Derby-ware watching a horse race and EE was gesturing toward the far-off track and "splash" meant a lovely filly had just won and that certainly wasn't funny and I wasn't thinking sweet little weredingoes or werekitties being dropped over the side of a bridge because, I mean, who would even THINK that. Except for maybe when it comes to yappy, toothy little chihuahuas or those bratty little 12-pound terriers who think they're 112-pound Rottweilers and dare you to mess them ...