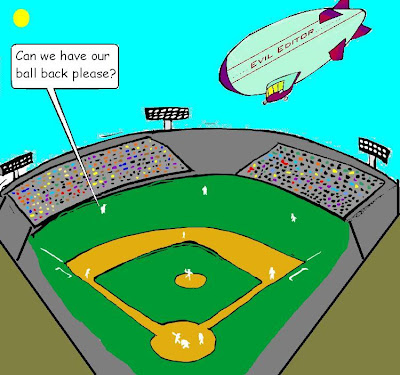 Your caption on the next cartoon! Link in sidebar.
Posted by Evil Editor at 7:35 AM

I have a thought question.

I think this happens with novels and writers but to a much lesser degree. It's a matter of expectations. Why does Dan Brown have the Everest of expectations when critics and professionals hate his writing? Why does Grisham succeed time after time?

From all of the speculation I've found on the internet, the die-hard viewers are going to be screaming and carrying on about Battlestar Galactica over the next two weeks. It doesn't matter how it ends, it won't end the way the die-hards want it to end. That doesn't say anything about the quality of the ending that will appear tonight and next week. IT DOES SAY a ton about the die-hard fans who want it to meet their expectations and thoughts and imaginings.

So be warned, no one will escape the blog, twitter and commentary shrieking and howling and bitch-fest that will begin tonight. I've seen this all happen before with Babylon Five, Star Trek's Deep Space Nine, Dr Who, LOST, and Farscape. Once upon a summer, even SOUTH PARK writers got death threats.

How do writers handle those expectations?"