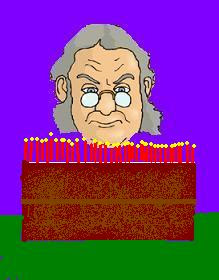 The task was to write a scene that began:

Evil Editor showed Jessica Biel out of his penthouse condo. His birthday party, attended by numerous celebrities and his minions, had finally ended. Never again, he thought, will I stage this event in my own place. What a mess. Animals, all of them. He stepped into his bedroom.

"You're still here?!" he exclaimed.

1. Miss Snark extended a languid hand from the velvet-clad bed. "Why, of course I am, darling. You've made it clear that you'll never forget about me - making me the star of your writing exercises two weeks in a row. So I thought, why shouldn't I haunt your bed as well as your blog? Now, sweetie, show me the gin pail and then I'll show you what 'omniscient' really means."


2. “Of course she’s still here,” answered a voice from under the bed. “She’s drunk on her ass again and singing the theme songs from the Oceans movies.”

“I told you hours ago to take her home.”

“Did you want me to carry her or drag her?” he said as he emerged from his resting place. “Hello! I’m a poodle you nitwit! She’s a quivering mass of uncoordinated jello and she refuses to take off her stilettos. Plus she outweighs me by--”

“Shut up Yapp,” she hissed. She sat on the floor with her back to the wall, disheveled, clutching an empty quart of gin. “Great party, EE. I need a refill and more olives.”

He looked down at her and sighed. Things had been rough for her lately. He shook his head and smiled, then pulled a pillow and blanket out of the linen closet and threw them on the floor next to her. “Come on KY," he said, turning out the lights. "Talk to me while I do some damage control out here . . . You know, she never should have stopped blogging.”

"Look, George, I don't give a flying fuck what you want. But you're not going to not be alone by being with me. Now leave."

"This glass stiletto I found under your bed. All I have to do is find its mate."

"Yeah, yeah, whatever." EE showed George to the door and triple-bolted it behind him. Three locks should be enough for tonight. Thinking better of it, he turned back and locked the rest.

He returned to the bedroom and stepped into his walk-in closet. Sprawled beneath the rack of trousers, clad only in a single glass stiletto and stinking of gin, was the last straggler.


4. EE contemplated the giggling, wriggling mass of arms and legs and glistening bodies. He noted, with profound resignation, the peculiar location of some heads.

"All right," he said, after a long pause. "How many minions did it take to change the lightbulb?"


5. “Yeah, I’m just turning on my Ipod.” Kristen took off her bra and flung it at Evil Editor. “What’s playing now, you ask? 'Can’t touch this.'” She shimmied out the door, boobs flopping to and fro.

“And you? What are you doing here?” Evil Editor looked at the tall, Canadian beauty.

“What about you?” EE twisted around and faced Ray. “You and your fancy comma rules and one-inch margins. Get outta here!”

Ray started to utter something about the door being compelling, but stopped himself and left.

“How about me, EE? We got a history, you know.” The Queen of Nitwits held a 42 inch semi-automatic clue-gun at EE’s heart.

“Okay. You can stay.” One last blogger remained, in the corner, laptop open, brows furrowed, furiously typing away.

“What in the world can be so important, Nate?”

“Everything, EE. Everything. I gotta tell my readers everything that happened this week in publishing. And let's face it, your party's the biggest thing going. So, what’s your blog going to have on it today?”

EE picked up the cheeky blogger and tossed him into the hall with all the others. Save one, who still had a gun pointed at his heart.


6. Red, gold, orange and purple fabrics created a tent-like structure in the bedroom -- a plush love nest, a bubble of kitsch, and a hidey-hole of bad taste that left the average for the utterly unhinged. Two men lay entwined on the silken pillows, genitals pressed together, DNA-stained silken towels draping their muscular bodies, both dressed in scarlet-red lace bras and matching crotchless panties, garter belts and fishnet nylons. They stirred. Vito woke and opened his eyes, startled. He grabbed a lacy silk cloth to cover his crotch as he sat up.

"We decided to spend the night here, EE." Vito tucked the silk into the front of his panties.

"Looks like it was quite a party, Vito, did you have fireworks or just get your rocks off?" EE asked.

Cold, Shawn grabbed his body without opening his eyes.

"Stay, lover-boy." Shawn grabbed the towel from Vito's waist, pulling it around his face like a blindfold, leaving Vito's genitals dangling. His well-defined physique rippled.

"You have to get up and get dressed, my dear." Vito shook Shawn, again.

"But it's our wedding night. We delivered Biels to the Best Man, maybe he'll serve us breakfast in bed."


7. “I, I thought you’d passed out!” sputtered Snark from the satin sheets of the waterbed. The pink rosettes of her nipples disappeared from view as she reached for the Beretta on the bedside table. “I want your blog and I’m willing to kill for it.”

But EE was quicker. The Walther was in his hands, a wisp of smoke swirling from the tip before he knew what he was doing. With lightning reflexes, he whirled around, shooting George Clooney dead in his tracks as he emerged from the bathroom. He pumped two more rounds as the closet door squeaked open, and Killer Yapp lay dead at his feet: crimson stained his fluffy fur like syrup on a sno-cone. His clip, heart and soul empty, EE stood in shock and didn’t hear the rustle of the minor minion from behind the velvet draperies. It was the last thing he didn’t hear.

I shoved the .38 into my pants, grabbed EE’s laptop and “Blog Codes” from beneath a generous pile of prophylactics. Silicon was leaking from Snark’s left breast; I was surprised to notice that Clooney’s butt was just as tanned as the rest of him. “Farewell, EE. Maybe in your next life you’ll realize that grammar is the only thing that matters, the only thing that lasts,” I said, grabbing the Tanqueray on my way out.


8. "We're your birthday present," they said in unison.

"Well then, you're just going to have to choose," Eva said, fluttering her eyelashes.

ROFL. Miss Snark always seems to figure in these, doesn't she?

EE, you old sex symbol you.

I'm guessing lots of minions are guessing what you look like, and it doesn't have a lot to do with those mutton chops, there, Sparky.

Bernita- Loved the picture this gave me-
"He noted, with profound resignation, the peculiar location of some heads."

Hi Mckoala--Your omniscient line cracked me up! Dave, yours was great, and I loved them all!

Robin, If you'd like to see a picture of EE I took last week, please go to my blog:

And what's a picture like that without a fantasy to go with it? EE, my posting is dedicated to you (grin)

Thanks for the edit, EE.(I was POV-drunk) No hard feelings, I hope. Like George, I only shoot blanks.
Is it really your birthday?

May we ask, Is EE's birthday just past or nearly arrived?
And, is it perhaps a decade-with-zero birthday?
Own up, EE, own up!

If you're talking about the fellow this blog is named after, he made his first appearance April 23rd.

If you're talking about his assistant/scribe, my birthday is not in June or July, nor is the last or next one a multiple of 10.

LOL, the minions were in particularly witty form this weekend. Bernita's lightbulb was the standout for me (so to speak)!

Me: I thought the POV shift was done deliberately as a riff off our last POV discussion!

EE: Able to only handle six at a time now, eh? Ain't growing old a bitch?!

Takoda: Loved the "Nate" and his Friday blog reference! As for the other, how will I ever reconcile the image of mutton chops with that bare butt? I think I need to go talk to my therapist now...

OMG, my word ver: seexx
(Haven't we had enough of that for today?)

This beats the living hell out of mutton chops.

Thanks for the heads up...or whatever you'd liek ot call it/him.

Of course, if that IS your backside in takoda's picture, that narrows the age range considerably.

Thanks Phoenix yes, it was. But I began the piece with EE 1st person POV and he did a fix.

Almost as fun as being at the party!

Now that you mentioned it Robin, it would be nice to have a few more specs on EE's proclivities and passions. It would enhance my ability to characterize him in the next fanfic.
So, EE, even one answer would be appreciated.
Vodka, Gin, Scotch, Beer or Wine?
Blondes, Brunettes, Redheads?
Ford, Chevy or Toyota?
Dogs, Cats, Fish or Fowl? (I'm guessing Fowl)
Boxers or briefs?
Position Superior, Inferior or Candaian-style --like doggies, so they can both watch the hockey game)?
Inquisitive minions need to know!!

Speaking of Birthdays, I was at dinner tonight with a relative and her 6 y/o munchkin. And when I asked, being cute and funny what NUMBER birthday (2 weeks away) this was, knowing full well it's the dread "30" ...
The munchkin perks up like a bright sunflower and says: "Mommy says don't tell anyone about the number, and Grandma says that Friday is a big surprise, but we're not supposed to talk about it."

I nearly fell off my chair, giggling.

Robin, if the last one or the next one is not a multiple of ten - this one could be! Assuming next is used to refer to the one after this birthday, which I suppose it might not be. But it might be...

If you're talking about the fellow this blog is named after, he made his first appearance April 23rd.

If you're talking about his assistant/scribe, my birthday is not in June or July, nor is the last or next one a multiple of 10.

So, am I clueless, or did we just learn that EE is in fact two people? Which would explain the consistency with which "he" is able to post without losing his job.

Pacatrue, we have learned that EE has prehensile toes...

A contortion familiar to me, Robyn - and probably to all of us from time to time.

"the last thing he didn't hear."

Hoot!
But I liked them all.

Hi mckoala. EE could be a multiple of ten right now, the way he phrased it - hadn't thought of that. Oh, I mean, his scribe could be.

All I know is, whatever number his scribe is, he's got some pretty good fantasies going on with and for his alter ego,supported by a (very youthful) all-star cast.

Not to douse anybody's fun or anything, but could we just once have a writing exercise in which Miss Snark does *not* appear? Seriously, can't this crew of creative types be a bit more creative?

Very cute! I think Bernita's was my favorite.