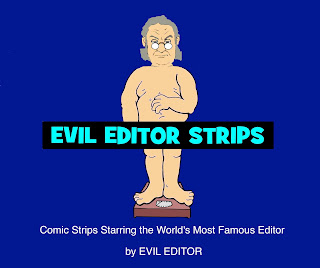 Okay, for those who've been following the Evil Editor Strips saga, the problem strip is no longer a problem. The printer has given me a code with which I can re-order the books, and they claim I can order them in softcover or hard, so I'm going with hard. (They normally charge an extra eight dollars a copy for hardcover.)

Once I saw the mistake in the original order of 15 softcovers, I contacted them and canceled an order of five hardcovers which I was planning to keep/give as gifts. Shockingly, those five books showed up the next week, with the defective toon. When they eventually told me they'd finally solved the problem, I didn't trust them, so I ordered three hardcovers. They came out just right. So, here's what I now have:

And coming in a couple weeks:

15 hardcover copies with no problems. (I hope.)

And rather than put the book in the Evil Editor Store, where my shopping cart host charges 9%, I've attached my email address (evledtr@gmail.com) to a Paypal account. I believe Paypal takes more like 2%. As I understand it, all you need is someone's email address to send them money out of your own Paypal account or with your credit card. I guess I'll find out if this is correct as soon as someone attempts to order one of these books.

So, working with round figures instead of putting .99 on the end of everything (because it's easier to add up totals, even if it does make everything seem much more expensive), if you want the book, send me money through Paypal as follows:

Other countries, here's my guesstimate. Sorry if I'm way over.


Besides sending payment, email me (evledtr@gmail.com) to tell me what you paid for. And if you're ordering one of the books with a defective strip, and you want me to add speech balloons to that strip so it has a punch line, let me know. I don't claim I can do a better printing job than you could, but I'll do my best. Possible caption options are at the bottom of the previous update.  Feel free to request anything else. Sample strips may be viewed here.

I have no idea if many (or any) of you want the book, but due to the limited quantities of some items, you might want to email me now and reserve what you want. For instance, if you want to give a perfect hardcover as a Christmas gift, note that there are currently only three, and I may not have the other 15 in time to get one to you for Christmas.

Oh, and that guy who wanted to give his wife an editing job for Christmas, but lost the auction: cool idea. Email me if you still want it, we'll negotiate a deal.

Don't know what it costs you to receive the money, but looks like it costs the sender (e.g. me) 3.4% plus cross-border transaction feels plus currency exchange.

Sorry. Of course, it wouldn't surprise me to learn that any time you use a credit card there's a fee attached, or the merchant has upped the price to cover the fee so that it looks to the buyer like there's no fee.

Well, the fee's avoidable if one has their own Paypal account or funds directly from a bank account. Just the plastic that costs more. I mean, we're talking like a whole dollar here. Guess iI could skip a cheeseburger or something.

I'll throw a cheeseburger in the package with the book.

OGLAF offered mail order cheeseburgers at one time but If yo've ever read the very NOT SAFE FOR WORK OGLAF you might think twice about ordering that cheeseburger. A thousand little eyes might have looked at it...