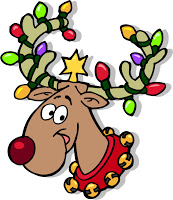 
1. A guy who pees on her boots. A porn-obsessed crybaby. A cheese thief. Sofia always seems to end up with losers. Her latest boyfriend has just given her her Christmas present: a crummy loaf of bread! Is this the final straw? Or is this what she gets for moving to LA?

2. Something sinister is afoot when the insurance office does its Secret Santa drawing and everyone draws Lucretia's name. Lucretia gets 35 gifts -- and a bullet in the head. Only mailroom boy Clark Cooper has what it takes to solve the mystery and deal with the Returns office at Macy's.

4. When Santa's henchmen get tipsy on grog left beside the tree on Christmas Eve and end up busted for burglary, they soon realize the only way to survive incarceration is to form their own gang. They can't be "elves" any more. So they pierce their substantial pointy ears and swagger around, calling themselves the Holiday Lords.

5. Tina is beginning to hate Christmas. Every year it's the same two weeks of stress-inducing hell. Her family, in-laws, her family, in-laws. That is, until she finds out that she's married into the richest, most powerful group of witches and warlocks in the country. Can Tina convince them to halt their assault on the holidays and just relax already?

6. Christmastime, gentle snow falls, merry Santas, bludgeoned girls whose hair falls over their crushed skulls like strands of silver . . . it's just another day for Rudolph.

7. Secret Santa is all fun and games, until Hayley opens her package and finds a human hand. Should she report it to the cops or investigate herself? How hard can it be to spot someone who's missing a hand?

8. Evelyn told her mother-in-law that she wears a size 12, when a 16 is closer to the truth. With the family reunion drawing near, will Evelyn resign herself to wearing the ill-fitting gifts her mother-in-law sent her for Christmas, or will she find a way to escape. . . The Lies that Bind?

9. Charlotte has a thing for holidays. She poisoned the marshmallow chicks in her first husband's Easter basket, strangled her second husband with the ribbon from the Valentine's Day chocolate box, and suffocated her third with the helium balloons at his own birthday party. Now, as Christmas approaches, hubby #4 wonders why that package under the tree is ticking.

10. Every year, Carrie's creepy boss has groped and French-kissed her at the office holiday party. With the antidote in her hip pocket, she waits near the mistletoe and keeps her tongue away from her poisoned lipstick. By this time next year, she'll be the VP doing the groping.

11. Christmas at the estate of Lord Ajax was supposed to be the climax of this year's social season-- and the moment Lord Ajax proposes to her. But Clarissa discovers she is not to be the recipient of a marriage proposal, when she discovers her Ajax under the mistletoe, locked in the embrace of . . . her brother.

12. It's Christmas, and Christine has no one to spend it with--until she gets drawn into an international drug conspiracy by hunky doctor David McLeod. Now that she's found true love, can she stay alive long enough to enjoy it? Also, Johnny Cash.

13. Kelly Coosman volunteered to work the kissing booth for the parish Christmas Gala…it was the least she could do after Father McElroy rescued her from the streets of Chicago. But she’s been on her feet for fourteen hours straight, smooching hundreds of nicotine-fouled old men with rotten yellow teeth, and she's thinking prostitution wasn't so bad after all.

14. Confident his parents won't be getting him a Christmas present, Nate runs away from home and moves into Wal-Mart. When a night security guard finds him and realizes he's the missing boy she read about in the newspaper, she sets up a tent, gets Nate a sleeping bag, and helps him set up a household. Hey, the place gets lonely at night.

15. What started as an innocent kiss at the Devorson’s posh Christmas party turns into an obsession that leaves a trail of bodies from New York to Nevada. Beautiful detective Mary Sky must find the X-mas Killer, following the clues he leaves her, before Christmas rolls around again and his knife finds her under the Mistletoe.

16. When the scarves Aya is knitting for Christmas presents start to fray, so does her mind - convincing her doctor that knitting and mental illness are linked. Can he prove it in time to save his wife, a knittaholic?

17. Fourteen year old Cassie hates her life: she lives in Alabama; the guys at school ignore her; and her mom's a beauty queen. Sent to retrieve the Christmas lights from the attic, she stumbles on a strange box that glows. Opening it reveals a tiny man who tells her she's the princess of Faerie. Adventure ensues.

18. Fiona is lonely and miserable at the dorms her freshman year. With no friends or family, she's stuck there over Christmas vacation. Making things worse, the dorms are supposed to be haunted by the ghost of a student who hung himself in the lobby. Fiona doesn't believe it...until the strange love letters start appearing on her pillows.

20. As a nonogenarian wraps Christmas gifts for each of her relatives, she reflects on things they and others have done to annoy her over the course of her long life.


The actual plots are:

Wow, I was way off! I really thought 17 was going to be one.