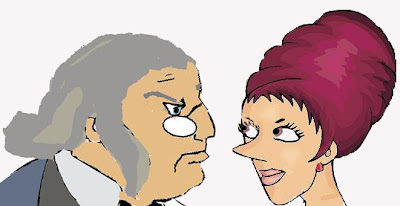 Like most sane people, Evil Editor avoided Twitter like the plague. The writing skills of humanity had declined enough without putting a 140-character limit on the only literary output being produced by the computer generation.

The final straw came when EE returned from vacation to find that Mrs. V had appropriated a major portion of his blog's sidebar with her tweets, most of which were cartoons mocking him.

EE immediately opened his own Twitter account. A few days later, EE boasted that he had as many followers as Mrs. V, but she pointed out that the statistics were misleading; her tweets were available on his blog, so it wasn't necessary for those who followed her to follow her. Fuming, EE immediately hired a techie, at a nominal charge of $804.99, to figure out how to put his tweets on the blog.

That's where we stand today. EE has declared he will stop tweeting if Mrs. V reaches 100 followers before he does. Mrs. V has accepted the challenge; she'll do the same, as long as he agrees to let her tweets stay on top of his in the sidebar, and not to take advantage of his engagement to Lady Gaga by asking her to encourage her followers to follow EE.

This is an outrage.

Okay, I will. My first tweet is going to be a novel idea about a dystopia culture in peril due to tweeting.

Oh dear, EE, I would demand a refund from that techie. Your tweets dont seem to be anywhere on your blog. At least, not where I can see. Mrs V's links are quite obvious.
I thnk sh e might be sabotaging the blog...

What? They're not in the sidebar on the left right under Mrs. V's tweets? They are on my screen.

They're there now.
I swear they weren't a while ago.

Sorry, why is Mrs Varmighan on top again?

I already follow you both. There's no more I can do.

She's always had the top position in the sidebar. She has, however, fallen behind in followers. If only there were a hashtag label for overworked assistants.