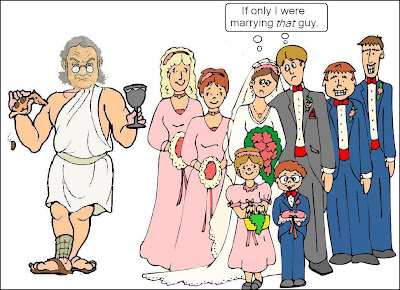 Your caption on the next cartoon! Link in sidebar.
Posted by Evil Editor at 7:21 AM

I hope you're going to do a book of cartoons or add the cartoons into your next book because they are generally outstanding and I really enjoy reading them.

I have sprinkled some cartoons into my next book.

A book containing just cartoons is possible. In color, it would cost twice what the other books cost. Converted to all black and white it would be the same price as the others. Another option would be a CD of cartoons, which could be viewed full-screen in color in a slide show format.

How about one of those - post-it note - calendars?
B&W or color, you can sign me up.

I just checked the TV listings, since our house now HAS to watch Hell's Kitchen because of the Brazilian woman who works for somebody JB knows... blah blah blah, and anyway, I just found out I'm gonna have to miss The freaking Office every week now.

Did you tell them to put that show on the exact same time as The Office? Because I think you did.

What about a DVD with the Saturday Shorts and some cartoon? I'd like to see you on a bigger screen.

Can't you tape the office? If not, they'll rerun it. If not, you can buy the DVD and watch is without commercials.

The CD of the 2008 films has been available for a month. You had to watch the first film of 2009 or go to Evileditor.net to know this, but I assume you watch the films, Rob. Come to think of it I suspect you didn't watch the second film of 2009 either.

That was...I'm trying to find the right word, and feeling lame because, of all people, a person who's supposed to be a writer should have the right word, but anyway, I'll fall back on I loved it so much, thank you, and you'll hopefully know I really mean it.

I have to go back and see if I can find a way to send a link to that.

Is that one on the CD?

No, but I'm sure there'll be a volume 2. Unlike books, I don't have to print large quantities

OK, well, when that one comes out, I need two, please.

Also, I miss the babysitting nights, and I think we need to have one again soon, please.

Robin,
I don't know what cable service you have but Comcast Cable's "On Demand" feature has repeats of The Office delayed a week.

And the NBC website has video on the internet of episodes delayed a week. Serch for "the office" and it should be the top site listed.