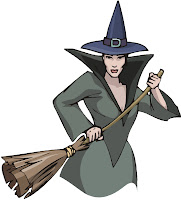 1. Sinister "accidents" are happening at the Lofton Estates. Only Manuel, the under-gardener, suspects the truth about those innocent-looking yellow flowers near the gate. Armed with only courage, weedkiller and pruning shears, can Manuel fight the power of . . . the Calendula Witch?

2. To sort through his emotions after learning he's adopted, Jeremy decides to sail his little catamaran, the Calendula Witch, across the Atlantic. But there's more to the Witch than he knew--she's really an Alluvimarr, shape-changed into a boat to guide Jeremy to his heritage in time to save his home world from destruction.

4. Ace homicide detective Zack Martinez sneezes halfway through telling Sgt. Shamrock they need a "calendar witch" who can alter time if they ever want a day off, and presto! A magical hippie chick appears, contaminating the crime scene with flower petals and enchanted glitter dust. She is horrified to see a corpse lying there with an ice pick in his head and quickly re-animates it. Trouble ensues.

5. Enid Whiffleton was the sorriest teenager in Littleville until she ate a basketful of calendula blossoms and acquired magical powers of canine bewitchment. Now she's the proud owner of the Twelve Dog Flying Trapeze Circus. But will she complete her destiny by finding love in the arms of her arch-rival, lion-tamer Thor Jones?

6. When her parents die in a car crash, twelve year old Mary Gold will do anything to keep her siblings from going into foster care . . . even witchcraft. But she's not very good at it, and when a love potion goes terribly wrong in the school cafeteria, hilarity ensues. Can Mary learn enough witchcraft to keep Child Services from splitting up her family?

When her assistant Dreanor is injured in a mysterious lab accident, San Francisco witch Calendula Isadora (Callie) investigates. It’s not the first time strange things have happened in CORP [--which stands for Paranormal and Occult Research Center, but they got so much ridicule for calling themselves PORC that they scrambled the letters--], the magical research laboratory where witches and warlocks study the science behind their spells. [Sample questions on the standardized test for admittance to PORC CORP:


Which is more likely to improve the flavor of witch's brew?

a. Eye of newt
b. MSG
c. Urine of Brad Pitt
d. Egg of a hen that's been on an oregano-only diet
e. Contents of a large pustule]

The trail goes cold, however, as Dreanor begins to heal, and Callie is distracted by the joy of her own growing pregnancy.

Callie continues to search for the cause of the accident, even as she hires a temp to fill in for her assistant,

[Calendula: Thanks for coming, I'll need you for about two weeks.

Temp Assistant: The agency didn't actually tell me what my duties would be.

Calendula: Let's see, you'll be scrubbing out the cauldrons, injecting poison into apples, luring plump children to my home in the woods, and gathering organs and extremities from small animals.

Temp Assistant: Oh well, it's gotta be better than my last job, waxing Rosie O'Donnell's back.]

fulfils her duties as a member of her coven, and inadvertently creates a most peculiar golem. [She hacks up a phlegmball in the shape of a tiny man, and it does a soft shoe dance. Most peculiar.] Then, just before her baby is to be born, Callie discovers that the hospital itself is a locus of evil. She rescues Dreanor and brings her back to the coven house.

On Samhain, the holiest night of the witch calendar, Callie gives birth to Valeriana. Then, in a shocking betrayal, those closest to Callie drug her and take her newborn daughter. Now she must rely on her own power, and the help of two humans, to defeat the forces united against her and reclaim her child.

CALENDULA WITCH, an urban fantasy, is complete at 85,000 words. The novel stands on its own, but is also envisioned to be the first in a series. I’ve enclosed _________. May I send you more of the manuscript?

It's not clear why we're spending so much time on the assistant and the lab accident. Is it just because it gets Callie to the hospital where she discovers the evil locus? I'm not sure we need that, either. Why not begin:

On Samhain, the holiest night of the witch calendar, Calendula Isadora gives birth to a baby girl. Then, in a shocking betrayal, those closest to Callie drug her and take her newborn daughter.

Now fill us in on who she is and how she handles the situation. That's your story, isn't it?
Posted by Evil Editor at 3:56 PM

Wow, #2 was so bizarre I thought it had to be the real one, but no.

Totally agree with EE's comments. The real story is how Calendula gets her baby back. I would delete everything else in the letter and focus on that.

What EE said. Sounds like fun but we need more info. I'm not clear about the relationship between subplot "stricken assistant" and subplot "baby-snatchers". I'd also like to know more about what kind of science they're using on these spells. Cannot guess if that is handled in a spoofy way or darkly Frankensteinish, or what.

Maybe it should be PORC. I like EE's acronym.

I also agree with EE on where the story is - or where it seems to be. There's a lot of tension surrounding the kidnapping of her child and yet it's handled like just another thing in this list of what happens.

I have never thought about Brad Pitt's urine until this moment. Thanks, EE.

Robin, if you read this, I can't get through your email on your blog profile, but I listed mine at the top of my blog page.

I need educating, please: and you guys are just the ones who can do it.

Urban Fantasy is -- gritty, realistic fantasy in a contemporary setting? Or am I way off?

I dunno, EE. I'm not sure anyone could ever recover from the horror of waxing Rosie.

I don't know the book, not being the author, but if the kidnapping is the climactic "third act" of the novel, should the author still lead with it in the query?

I think nowadays you'll find urban fantasy is not only as you described, but also with a first-person, kick-ass female main character with lots of attitude.

but if the kidnapping is the climactic "third act" of the novel, should the author still lead with it in the query?

Building up to the climactic act is okay if the buildup is tense and exciting. Here we're not sure the buildup is connected to the kidnaping. We're not even sure the lab accident wasn't just an accident. If the accident killed the assistant, and Calendula was supposed to be doing the experiment, we'd figure it was connected to the kidnapping. As it is, someone's hair caught on fire, and they got taken to a hospital that is claimed to be a locus of evil, though we don't get any evidence of evil.

Thanks! I'll go grab that.

You know a lot about kick-ass, attitudinal women in urban fantasy. Maybe I should explore other genres.

Maybe so. Urban fantasy is hot.

For a marketing piece on Performance Testing, I once suggested the title: Performance Anxiety? We Can Help

The soooo serious techie guys asked for another writer on the project after that.

I'm loving the research lab idea here. But, as others have pointed out, the cause-and-effect logic is lacking in the query, and part of the confusion, I think, is in some of your word choices.

The lab accident is mysterious, but the way it's worded in the query, the reader doesn't immediately think a nefarious plot is afoot.

Strange things happening at a magical lab should be the norm, shouldn't it? "Unexplained" things might be better.

The trail going cold in the query seems to be connected to Dreanor's healing. And while we know Callie is investigating, we haven't yet learned whether there's a trail at all to go cold. Not sure "growing" pregnancy is the right term.

Then we have Callie continuing to search even after the trail is cold and she's distracted. And then we get some really vague stuff that apparently happens in the middle of the book: she hires a temp (on the excitement level: minus 2), fulfills her coven duties (if those duties are organizing the rush party, that's one thing; if they're working behind the scenes to create world peace, that's quite another), and creates a peculiar golem (which is significant because? Surely she's creating lots of peculiar things in the research lab).

Then, all of a sudden, the hospital is a locus of evil. The query doesn't mention ANY hospital before this. From the next sentence, we can infer you mean the hospital where Dreanor is, but the query hasn't set us up that Dreanor is in a hospital. Injured and healing, Dreanor could be anywhere.

The query doesn't prepare the reader for the shocking betrayal at all. I hope this isn't indicative of the actual events in the book. Inevitably, I was thinking Rosemary's Baby here, and remembering the setup in that book/movie. Then the two humans come out of nowhere to help.

So is the locus of evil in the hospital somehow connected to the kidnaping?

See if you can tie everything together for the reader, give us a glimpse into the witch world, and ratchet up the level of excitement.

EE: Got the answers for that standardized test?

Can I just pay you to write my query? (Hey, I'm only half kidding!!) And, are you and EE secretly related? Is there a query-writing gene?

That way I know it would be good, and my head wouldn't hurt.

Or I could just practice, I guess.
There's always that.

Thanks, all! Yes, Pacatrue, that is why I didn't lead with the kidnapping: it happens 2/3 of the way through the book, with the other stuff leading up to it (and connected better, I hope, in the book than in the query!). I've shortened and reworked the query, adding more about what happens after the kidnapping, and sent it to one agent to test the waters...I'll keep you all posted as to what develops! Thanks again, EE and all.

There is also quite a bit of urban fantasy that is more humorous in emphasis, though it may be gritty as well. Nobody does it better than Esther Friesner. Check out her recent Temping Fate: teenager gets summer job as an office temp for the Fates; angry gods disrupt her sister's wedding.