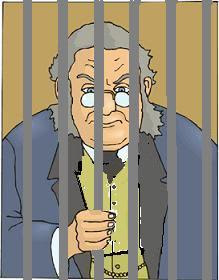 The task was to complete the following scene:


"Hey, I get one phone call," Evil Editor said.

"Yeah, whatever," the cop replied. "Here, use my cell phone."


1. He tossed it through the bars, then leant back against the wall, and closed his eyes. His yawn squeezed them tighter shut.

The cop opened one eye. "You can't call abroad."

He shut the eye again.

The cop opened both eyes. "What the hell are you up to, old man?"

"On what?" the cop said, through a yawn.

"This message from my friend Samue...er, to Sam. About my bail."

The cop laughed. "Bail? You rejected the Chief's novel. With nasty little comments. And you think you'll get bail?"

Evil Editor snapped the phone shut and handed it back through the bars. "All done."


2. Evil Editor took the phone. The guard thought he seemed reluctant to actually place the call when it came down to it, but he clearly knew the number by heart, punching it in without pause.

"Evil Lawyer? This is Evil Editor. I'm afraid I'm in a spot of trouble."

There was a pause, uncomfortable at this end and the bespectacled, gray-haired old man sweated and paced, and finally broke.

He turned to the guard. "How many charges of assault am I facing?"

"Assault - um, twenty three. That doesn't include the charges of murder, property damage . . ."

Evil Editor held up one hand and turned sideburn on to the guard, muttering something in the phone and receiving a response that was audible as a buzz from the cell phone.

"Well, if Evil Lawyer won't help me, what about Evil Shyster?" He dialed, got no answer. "I hate Caller ID," he said. "Let me try Evil Bonds Bailsman." A long pause. Finally Evil Editor folded up the phone and handed it back. The guard nearly turned away, but Evil Editor stopped him. EE took off his glasses and smiled resignedly. Then he took off the gray mutton chops and hair and looked at the guard totally bald."I would have preferred not to have to reveal this, but my hand is forced. So be it. Know, then, that I am . . . Evil Comic Book Character, and no prison can hold me."


3. Ed flipped open the cell phone and burst into song:

Spider Murphy played the tenor saxophone,
Little Joe was blowin on the slide trombone.
The drummer boy from Illinois went crash, boom, bang,
The whole rhythm section was the purple gang.
Lets rock, everybody, lets rock.
Everybody in the whole cell block
Was dancin to the jailhouse rock.

Gyrating his hips and playing air guitar proved too much. Ed dropped the warden’s cell phone, breaking it into three pieces.

“Uh, gee, sorry there mister. I got a little carried away. Lookin’ for number three though. She still here?”

“What are you talking about?” the warden asked.

“Number three.” Ed lifted his jail shirt, exposing the t-shirt with number forty-seven written on the front with black marker.

Number forty-seven said to number three:
Youre the cutest jailbird I ever did see.
I sure would be delighted with your company,
Come on and do the jailhouse rock with me.

“Ed,” the warden said. “You may be the king of blogs. But here in Memphis, there is only one king.”

The warden turned to his assistant. “Lock’im up with Mrs. Clooney. Give her a number three shirt to keep him quiet.”

"Hello, Mrs. McGillicutty? I'm standing here with your husband and I just want to say that I'd love to suck your toes while you lie naked in a bubble. The thought of your naked body give me a hardon." He breathes lustily into the phone. The cop grabs the cell phone and puts if to his ear.

"Hello, hello? Who is this!" he demands and waits for the answer.

"You dialed my wife? What are you a pervert?"

"But you just arrested me for making obscene phone calls. What else would I do with a phone." EE answers.


5. "Patrick, you gotta get Danny. I just been arrested for playin' a Pìobaireachd in public."

"Oh God help me Patty, I know. Playing Pìobaireachd's in public on pipes is permanently enjoined. I told them it was Ceol Mor not Ceol Beag but they looked a'me like I was stupid. 'Merican police don't know a siubal from a Taorluath." The cop stared at him like he was a mental case.

"No, Johnny stayed at home in his bottle but I'm a wearing my secret military sporran and it's restin' right above me manhood with the son of barleycorn inside."

"What's that? No, I played Cabar Feidh."

"Well no, I'm not naked. I'm regimental. Bobby Burns would be proud o' me an' my Great Highlands." EE looked at the cop and made an ugly face.

"They took me dirk, me skean dhu, me cap badge, even me Ghillie Brouges. I swear they're all named bastard Cumberland and I need a Macdonald. Either bail or tis Bonny goodbye for me arse." EE's legs went wobbly.

"Hurry and bring the boy lawyer. You and Danny are me only hope."

The cop grabbed the cellphone. "I ain't no Cumberland. I'm Vittorio Castellucci. Can't you read a nametag?"

"Listen, pal, are you aware of just who it is you've got locked up?"

"Precisely. Now would you do us both a big favor, and throw away the key?"

These were funny. But not enough wrote in!

I've been noticing less blog traffic these days, in general. Sooo, I have a question. Is this a bad time to send queries? Should one wait until the end of August, when vacations are over? Does it even matter?

This is a great time to send queries, as there are few in the queue, so you don't have to wait three weeks for yours to be posted. We're also desperate for openings.

A lot of US people take vacation the week of July 4, so expect things to return to normal soon.

Cellphones are so ubiquitous anymore. People do groceries on them and I swear to (insert deity here) their brains freeze up if they stop talking.

It's hard to make a phone conversation exciting when it isn't about death, destruction, breaking up or Phoebe's weight gain, Priscilla's pimples or Justin's latest fling or Brucie's bald spot. think of the mind-numbing mundaneness of cellphones for grocery shopping. They leave a movie and call a friend to talk about what the just watched. Walk away from a cash register and phone someone to describe what they bought.

Looks like we have a batch of evil imaginations working around here.

All good. Enjoyed all. Used All to do the wash and it got into my brain. Very funny Takoda!! No Evil Shrink??? I guess Dave didn't use up all his Scots dialogue a few weeks back, eh? BSquirrel, please explain, I don't have text messaging on my cell.

I used to play the Great Highland Pipes. Wore all that stuff, too.
Well, I used to tune them up a lot and play a little. Pipers know what I mean ;)

Crapometer is quiet too if anyone wants to drop by and liven things up...

The clues are all there :D.

It's a Code, written by a guy named Sam.

(I'm guessing EE buffy's right, and EE doesn't use text messaging. Takes typing to a whole 'nother level. That and the tiny keys, and the new code crap.)

Hi Robin,
Can you translate? Are the beep's consonants or vowels? This is just too hard for a weekend!
Thanks!

Google the code. The letters are separated by punctuation marks. You have to work for your reward.

It took three of us, but TA DA!! Minions, Help me Quick! If that's the type of code you'd use, Good Luck on getting out of jail!!

EE! Of course, I understand if this comment is not posted for awhile!!!

Hello, I'm back from holiday (from sunny Spain, where there was no rain...)

I'm too tired to read code and my carpal tunnel won't let me google. Can someone give me a cheat sheet?

The first person to email me with the code to this putrid puzzle (now I know why Miss Snark detested squirrels) will be entitled to a fair trade. A secret for a secret. (insert evil laughter here).

Just saw this thread a few minutes ago. Sorry!

My older daughter just arrived last night (1:00 am by the time we were home from the airport) - and the rest of us just got home from Portugal and other places 2 days ago- so it's a little hectic around here.

Anyone done the Morse yet?

I'm sure that the beep code is clever and funny as hell, but I'm not even going to try and figure it out. I hate that kind of thing- mostly because I'm horrible at it. Someone share the answer pleeze...

Okay, I forgot exactly what it said because it's been several hours, but the beeps are dots, the bedeeps are dashes, it's Morse code, and I think it begins Minions help me quick.

Huh, couldn't find it on Google so asked hubby (ex-communications navel officer). He said, "Looks like 'miteisos'". Some help.

or should that be 'naval'?